In early February, on the 5th of the month to be exact, I was in high spirits: at last I had clinched a meeting to finalise plans for the local mountain-top gold mine to pump water down to my farm. The mine’s lofty location has blessed it with a seemingly endless supply of water which it had been generously piping to the community below as part of its social responsibility plan.

As a friend and I drove up the mountain in great anticipation of seeing the water-piping plans, we came across two emergency services vehicles, an ambulance, and an inspector’s car, coming down the mountain from the mine.

My first thought was that there must have been a mining accident. “Ah, no” said the ambulance driver, “No big deal, just the illegal miners killing each other again. One was shot dead so we’re out of here. Pathology can deal with the stiff.”

The driver’s comment, which I found very insensitive, hit a nerve. I found myself pitying those economically desperate youths around the country who risk life and limb in this illegal mining activity. 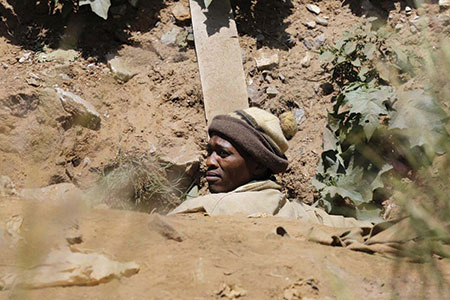 Making matters worse is that the driver’s comment and the shooting of this unnamed zama-zama followed a television news report the day before about four illegal miners who had been shot and killed at another mine, in Gauteng’s Daveyton area.

The report also highlighted how another zama-zama – this one, a fleeing suspect allegedly involved in the shooting of the four – was killed during a shoot-out with the police.

Why should I care about a bunch of trespassing youths stealing a mine’s gold?

Blame it on my coverage of illegal mining activity in the Barberton area in and around 2008 to 2010. What I saw there were, in my estimation, not so much criminals – as they were regarded when they appeared in droves in the Barberton Magistrate’s Court – but rather a bunch of desperately deprived township kids taking advantage of an easy, albeit risky, “golden” money-making opportunity.

Of course, as the activity gained momentum and word spread of the loot that was being made, township thugs wanted their piece of the golden pie too – after all, the cops were already getting it, so why not them?

And while the cops would later consider the customary bribe not good enough and resort to robbing the diggers at bogus roadblocks, the township thugs would rob them just as they emerged from the mine.

The diggers would later get fed up with being robbed, so laid charges against the cops at their own Barberton police station. Meanwhile the other nuisance, the thugs, were dealt with by fighting back – and so began the zama-zama wars. The golden gains at Pan African Resource’s Fairview, Sheba and New Consort Mines came to a halt. In fact, the zama-zama wars would see all of Pan African’s mines diggings self-destruct. However, the “golden” opportunities have simply relocated to the other side of town – to Agnes Mine, a Galaxy Mining operation.

Back to the insensitive ambulance driver whose indifference, to be fair,  cannot be held against him becausethis new zama-zama war has taken on a deadlier dimension and he has probably had to respond to a zama-zama death nearly every week  in 2014.

What can this deadlier dimension be attributed to? Well it would seem that the diggers learned hard lessons back in 2010 and this time have vowed they will fight to the bitter end to protect their golden gains.

Believe it or not these guys would come down from the mountain mine shafts with AK’s strapped over their shoulders like some African rebel group. And though this writer prides himself on being a brave journalist, there was no way I was even going to attempt to take a photo, let alone publish it in my Guardian. After my earlier exposés of Barberton’s illegal mining, some of these golden boys not only know me, they know where I live.

Now get this: when the police raided them in mid-2014 and confiscated their golden booty, the boys simply piled into a Kombi and stormed the police station, demanding its return. Their reasoning, as they relayed it to this scribe, “We pay these guys on a regular basis so there is no way we will allow them to also take our gold”.

Of course the Barberton police denied the storming. What a joke, considering that this scribe’s sources were not only the diggers themselves, but fellow officers who said “we’re not involved in this shit, so when we saw them pulling up, we got the hell out of the station”.

So on Thursday February 19 the Agnes diggers would meet the same fate as those at the Pan African mines in 2010. And two murders in Barberton’s Emjindi Township the previous weekend were attributed to their war. As if that wasn’t enough, a reported guerilla war-like fire-fight erupted in the mountain shafts that Thursday morning.

These two incidents finally prompted the police to rid Agnes of its  zama-zamas  – something they should have done way back but, as the diggers said, “We pay these guys...”

So it was that this writer lost roughly two valuable farm-production hours while my hard-working workers downed tools to watch the police helicopter fly over the farm and police vehicles speed past the farm’s fence, bound for the diggers’ nearby base camp, Kamdakwa. Maybe it’s time to pack the tractor and relocate. 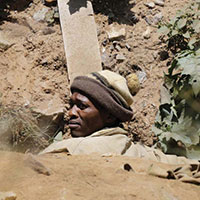 On the weekend of February 21, this writer would hear a news report that in another Mpumalanga community, six zama-zamas had been shot dead in faction fighting.

It seems clear that part of the Department of Mineral Resources’ Social and Labour Plan requirements to the mines should have been to prevent illegal mining activity.

Except for the robbing thugs, these are just economically deprived kids mercilessly killing each other over a resource that, by rights, should be used to reverse their economic deprivation. By the way, DMR, have the mines met the Social and Labour Plan requirements? After all, the deadline was 2014.