There were 143 road deaths reported for the 2014 festive season – which most of us, fortunately, somehow survived. I could not wait to get the latest holiday season’s road-deaths figure; if that sounds a bit morbid and insensitive, I ask your forgiveness.

I was not looking forward to this statistic because of some research project I’d been commissioned to do, nor was I interested in its journalistic value – even though, as it has turned out, I am using it for this column. Instead, my interest was triggered by the habits of other road users in early December. (Take note that the term “road users” is employed here in the most diplomatic sense.)

The specific users I would love to see down the road, having rolled their vehicles, are the ones who come flying up behind you at breakneck speed, flashing their lights for you to give them the right of way by moving to the left of the yellow line. 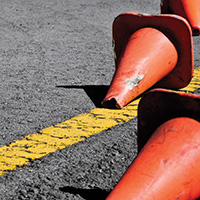 Likewise, those who also approach at breakneck speed and tailgate you – of course a sign for you to make way – then come up so close that you’d think I had a bumper sticker with the Grace Jones song Pull up to my bumper.

Firstly I am thoroughly enjoying listening to Janis Joplin’s Me and Bobby McGee. Secondly I am not a speedster and, well, most of you Blue Lights Brigade wannabee’s are breaking the law. Moreover, why should I risk hitting a boulder, cow or whatever else might pop up while I’m on the yellow line giving way to you? Sorry Jack, if you’re in such a rush, overtake me on the right when you get a chance.

Besides, I hardly think the yellow line was designed to make room for some annoying law-breaking speedster flashing his lights and his “pull up to my bumper” counterpart, despite the practice having become an integral part of South Africa’s driving culture. Again, sorry that I’m not one for being trapped by culture or tradition – especially something as idiotic as this. It’s an annoying practice indulged in by drivers who believe they own the roads.

Right after New Year I was driving to neighbouring Nelspruit and vehicles were zooming past me at breakneck speed. On the trip back to Barberton, the same. I wondered whether I’d missed something; were they driving away from some natural disaster, a hurricane, or tsunami perhaps?

Well, I was not having any of it. I continued in my determination not to be intimidated by these road hogs. After all, I was not in a rush and why should I not enjoy a nice drive, delving into my thoughts and enjoying my music or debates on the radio?

Yes, there are some who might find my refusal to give way by driving on the yellow line rude. But I’m not the one being rude. Rural roads such as we have here in Mpumalanga can be dangerous due to the many pedestrians, winding routes and, of course, the risk of stray livestock.

Kudos to the government for building a nice highway between Barberton and Nelspruit just before the 2010 World Cup. However, maybe we’d have been better off with the old road – one lane in each direction – which did not have a yellow line.

Giving way by driving inside the yellow line has become an ingrained part of South African driving culture, but I dare say it’s with good resason: when you catch a glimpse in the mirror of someone coming towards you at speed, it makes you anxious and ruins your concentration.

It gives me a real kick to hold my ground, drive at the speed limit and refuse to be intimidated into moving over on to the yellow line. Then, when we reach a stop sign or the tailgating  driver eventually overtakes, he gives you a mean look as if to say “Don’t you know I’m the king of the road, get out of my way?”

Of course my reaction to this is guarded. I do not return the imposing look. Oh no, we must avoid a possible road rage incident – yet another ingrained RSA cultural practice.

Instead I sneak a look from the corner of my eye, all the while muttering f-you – with the barest movement of my lips.

►Dear Ed, Did you have to headline my hemp-farming piece “Pipe Dream” (nose184)? It essentially means, yeah, pal, that will never happen. Please, we are trying to promote innovative agricultural ideas around here. Work with me, will you!