Mission to South Africa by Robin Renwick and published by Jonathan Ball Publishers as reviewed by Len Ashton.

Her Majesty’s High Commissioner said she 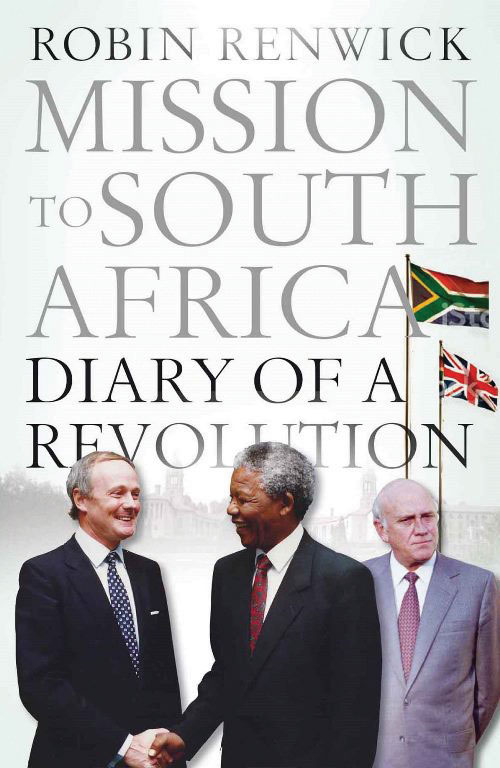 was delighted to find herself in the midst of history. As a trained historian, she particularly appreciated the assembly of notabilities gathered to celebrate Lord Renwick’s Mission to South Africa – Diary of a Revolution. Practically the entire cast of principal actors in those momentous times was clinking glasses recently on the High Commission lawns in Cape Town.

There were, of course, some notable absentees. The late P W Botha was not able to defend against the author’s memories of curiously sinister encounters with the last apartheid president.

But F W de Klerk was present to praise the “fresh” immediacy and accuracy of Renwick’s reports to Margaret Thatcher’s government when he was Britain’s ambassador to South Africa during those crucial years.

Mission clearly demonstrates that the two men respected each other and, after the grumpy intransigence of Botha, the envoy was relieved to be working constructively with the “calm and intelligent” De Klerk. The calm, or at least the appearance thereof, was particulary appreciated at a time when the country teetered on the brink of chaos.

The world rightly celebrates Nelson Mandela’s pivotal role in rescuing peace from the jaws of bloody revolution, but Renwick’s notes show that we also owe a debt to a small band of intelligent officials, many of them Afrikaner intellectuals, who made significant contributions to that resolution. Even Jacob Zuma is shown to have made mighty efforts to soothe the rivalry that tore Zulus apart. Of course, the apartheid security forces’ dangerous mischief-making in Zululand didn’t help either.

Renwick’s speech at the book launch included admiration for Prince Mangosuthu  Buthelezi (who was among the party guests) for sticking to his guns in refusing to negotiate with the apartheid government unless Nelson Mandela was released.

It is interesting to read of Thatcher’s sustained insistence on retaining sanctions against South Africa on the same basis: release Mandela and then we’ll talk. She repeated endlessly that goodness would flow from that release, and nothing else would do. She was right and she was consistent in her opinion.

Renwick was moved by Mandela’s personal dignity and decency. Party loyalty sometimes obscured those qualities as ANC heavies demanded the repetition of rhetoric calling for nationalisation. And, he observes, Mandela was an innocent in regard to the economy. The British, with their significant investment in South Africa, were naturally alarmed by talk of nationalisation.

Renwick’s memoirs prove that this country owes a considerable debt to Britain for acting as an honest  broker when the rest of the world, including the US, refused to engage with the pariah state.

After his departure from South Africa, Renwick progressed to become Thatcher’s ambassador to the United States. Unsurprisingly, this energetic and principled envoy is now Lord Renwick of Clifton. His Lordship’s new book is well worth reading.