The Sunday Times has contested Noseweek’s detailed criticism of their original story in which they claimed to have found evidence that the SAPS serious and violent crimes unit based at Cato Manor operated as a “death squad” for hire. In doing so they also launched a personal attack on one of Noseweek’s reporters.

In the meantime Noseweek has gathered still more detailed evidence which casts further doubt on the veracity of the Sunday Times story. Here is a condensed version of a longer account of events, available on Noseweek’s website.

May 2009: A colonel from the Hawks approaches Noseweek reporter Paul Kirk with claims that Mkhize was murdered. The Hawks colonel, who asks not to be identified, claims his contact at the Independent Police Investigative Directorate plans to charge Cato Manor cops with Mkhize’s murder and claims that Maj Gen Johan Booysen and members of the Cato Manor unit are in the pay of Mkhize’s taxi rivals (nose184).

26 Nov 2009: Cato Manor cops shoot dead suspected bank robber Prince Thabede, who has been charged with murder and is out on bail.

3 Dec 2009: Shamila Williams tells colleagues she has a statement from Thabede’s girlfriend Denise Hurley,  which says that he was murdered by policemen who she has named, and who planted a gun on him after his death.

The Hawks colonel offers to introduce Kirk to Williams, his friend from the IPID who, he claims, also has proof that Ndimande and Tembe were murdered. The introduction never takes place.

Kirk makes inquiries into the colonel’s claims of “massive corruption” in the Cato Manor unit. Kirk begins to have doubts when he learns the colonel once claimed in court that he took a witness statement from a parrot.

Sept 2010: A gang suspected of a spate of violent robberies at casinos is arrested by Cato Manor police and charged with robbing the Sibiya Casino. The gang is led by Malvern (aka Melvin) Ndlovu. Prosecutor Yuri Gangai tells the court the accused are all wanted on 30 to 40 cases of armed robbery, including a number of cases where policemen were attacked with “military weapons of war”. Ndlovu alone has had several warrants for his arrest issued between 2007 and 2008 – all for bank robbery.

Late 2010: It becomes evident most of the colonel’s claims are hype and invention: Kirk interviews Mkhize’s rival taxi bosses who insist Booysen’s men were not in their pay. The Stanger Taxi Association, like Mkhize’s, claim Booysen’s cops unfairly target them for arrest.

Sept 2011: At a bail hearing Colonel Brian Padayachee says phone intercepts had revealed that Kirk’s informant, the colonel, had been conspiring with police admin officer Navin Madhoe and businessman Thoshan Panday – who were suspects in a serious fraud and police corruption investigation led by Booysen.

Padayachee publicly identifies Kirk’s now-discredited source as Colonel Rajen Ayer and reveals that: “on 19th August 2011 Ayer was recorded telling the main suspect, Panday, that he can help him with his case”.

Dec 2011:  The Sunday Times reports they have uncovered a “death squad” run by Booysen and his men and quotes eye-witnesses whom they claim to have interviewed who say they saw Ndimande and his bodyguard being murdered and guns being planted on them.

Following the Sunday Times exposé, the Cato Manor unit is closed down. Police Minister Nathi Mthethwa says this was necessary because of the stigma of the negative media reports.

Jan 2012: Shamila Williams tells her colleagues she has affidavits from the witnesses to Ndimande’s murder. Sources in IPID tell Noseweek they were relieved to see the Sunday Times article as some had begun to suspect Williams had invented the Ndimande witnesses.

22 Mar 2012: More than two years after Williams claimed to have taken a statement from Hurley, Prince Thabede’s partner, a senior IPID investigator based in Gauteng calls to take a “second” statement from her. IPID had apparently become suspicious of Williams’s extraordinary ability to produce witnesses “out of thin air” and have them provide “absolutely amazing affidavits, which implicated the same two or three policemen every time”. 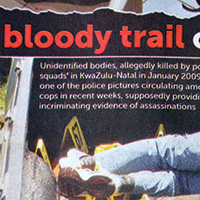 Oct 2012: Prosecutor Yuri Gangai withdraws the confessions of Malvern Ndlovu and his co-accused casino robbers. Gangai tells the court he believes the confessions were obtained by torture, since the investigating officers are part of the same notorious Cato Manor unit exposed by the Sunday Times.

Jan 2013: Ndlovu and his co-accused are released from prison when the case against them collapses. Prison authorities appear to have been unaware that Ndlovu and his gang are also wanted in numerous other provinces for murder and robbery, and are also in the country illegally. Within 48 hours a series of robberies takes place at casinos in Gauteng.

Since then numerous other armed robberies with identical modus operandi have taken place. Cato Manor cops say their attempts to warn their Gauteng counterparts about Ndlovu led to some of them being threatened with arrest for interfering in police investigations.

Late 2013: Noseweek discovers that the affidavit Shamila Williams allegedly took from Hurley in 2009 carries the wrong initials on each page. Contacted by Noseweek, Hurley denies having deposed to the affidavit. She was never able to identify particular suspects, nor had she seen a gun being planted next to her partner’s body (as in the statement Williams claimed earlier to have taken from Hurley). Hurley tells Noseweek the only statement she made was given three years after the event to senior IPID investigator Molatedi Molatedi from Gauteng.

Oct 2013: The Sunday Times again reports on Dramat’s rendition of Zimbabwean suspects. It claims to have seen documents that prove Dramat was implicated in the kidnap and murder scheme.

Mid 2014: An expert questions document-examiner reports that the signature on the affidavit that Williams took from Hurley does not match other examples of Hurley’s signature.

Oct 2014: A senior Cato Manor cop tells Noseweek an informer has contacted him several times with credible information on who murdered South African football legend Senzo Meyiwa on 26 October. The officer says he has done nothing with the information for fear of having his bail revoked for interfering with an investigation. The informer alleged the killers were two professional hitmen, one of whom lives in Durban.

Late 2014: Williams is called to a disciplinary hearing on numerous charges. Among them, that she forged internal IPID memos to allow her to take IPID cars home and that she invented claims that she had witnesses who saw Ndimande and Tembe being murdered.

These appear to be the same witnesses the Sunday Times interviewed.

Williams resigns, and her resignation is accepted. All attempts to contact her fail.

24 Dec 2014: Anwar Dramat is suspended over allegations that he was part of the illegal rendition scheme involving Zimbabwean suspects that the Sunday Times reported on in 2011 and 2013.

Jan 2015: A gang of armed men wearing overalls and carrying sledgehammers robs the Blue Route Mall in Tokai, Cape Town. Cato Manor police officers tell Noseweek the modus operandi used by this gang is the same as Ndlovu’s gang, which also favours overalls and whose members were released following the Sunday Times exposé.

Feb 2015: IPID head Robert McBride, who is familiar with the docket, reveals that it contains no proof of Dramat’s alleged involvement in the illegal rendition of Zimbabwean suspects. McBride trashes the Sunday Times’s reporting.