UPDATES: Doctor’s dismay at discovering he’s not Lord of all he Survés

Axed Cape Times editor Alide Dasnois was invited to be guest speaker at the University of Cape Town’s Social Sciences graduation ceremony on Reconciliation Day. Carelessly, the university hadn’t thought to check out its guest list beforehand with Iqbal Survé, the führer of Independent Newspapers and head of a fisheries empire. [C’mon, after all it was Reconciliation Day! – Ed.]

Not only was Dr Survé in attendance because he happens to be chairman of the University of Cape Town Graduate School of Business and a governor of the UCT Foundation; his daughter Saarah Survé was one of the new graduates.

For now the university is staying as mum as possible when questioned about what the führer had to say in an angry letter he sent after the event to Vice-Chancellor Max Price. But the story from secondary sources is that Survé was infuriated once again by the public acknowledgement of Dasnois. He apparently wrote to Dr Price – who, like  Survé, is a medical doctor – complaining that Dasnois’s presence was an embarrassment to him and his daughter.

Kylie Hatton of UCT’s Communication and Marketing Department responded: “Speakers for graduation ceremonies at UCT are selected by the Office of the Vice-Chancellor and confirmed approximately two months in advance. We did not know, that far in advance, who would be graduating at any specific ceremony because the list of graduands is not finalised until much closer to the ceremony dates. In this case, the Senate Executive Committee only confirmed the list of graduands on 10 December 2014. Those lists go to the relevant faculties and the Registrar’s office at UCT. The speaking arrangement with Ms Dasnois was completed without reference to who would be attending the ceremony she would address.

“We regret if this has caused Dr Survé or his family embarrassment, it was unintentional.”

It is not the first time Survé has been outraged at having to be in the same room as the woman he fired in December 2013 as Editor of the Cape Times, shortly after his Sekunjalo Group bought Independent Newspapers.

In June last year Survé stormed out of a media event, apparently – according to City Press – shouting: “It’s racist! It’s bullsh**t.” He was enraged that Dasnois had been awarded the Nat Nakasa prize for courage and integrity in journalism and received a standing ovation.

Dasnois was removed as Cape Times editor a day after the death of Nelson Mandela. Although several reasons for her axing were given, including the need for “restructuring”, later missives from the company blamed her for not carrying news of Mandela’s death on the newspaper’s front page (a wraparound commemoration of the life of Madiba enveloped the newspaper).

When asked by sms about his latest bout of lousy behaviour, Survé’s PA – identifying herself only as Maude – sent the following response: “I have doctors [sic] phone. Dr Surve does not deal with publications such as Noseweek. Kindly do not contact Dr Surve on his phone again. If you have any enquiries you can email me at maude@sekunjalo.com which I will forward to his Chief of Staff. [Signed] Maude, his PA.” 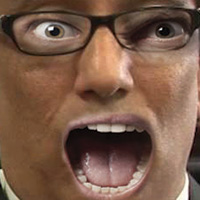 In her speech, she told graduates they had a “duty to be insubordinate... not in our manners of course, but in our thinking.” It was critical “to cultivate an outlaw mind. We have a duty to question what we are told and to decide for ourselves”.

Meanwhile, another slew of columnists have been given instant marching orders by the Cape Times. John Scott, a former editor, was told via a two-line email that his column, PS, was no more after 42 years. Others who got the chop were Judith February, Tyrone August and Peter Wilhelm. The current editor Gasant Abader said the newspaper was busy “refreshing” contributions from columnists.