There is a tavern in the heart of Barberton’s Emjindini Township called Rockafellas. Recently a patron of this very busy drinking hole was stabbed and killed following an altercation.

Upon investigation it came to light that this particular tavern is a neighbour-from-hell to the surrounding homes, staying open to serve liquor through the night until 5am, the time when many less-debauched citizens are having to rise and leave home for work.

Rockafellas is situated near two crèches and two churches. One, directly across the road, being the Salvation Army Church. Liquor licence regulations do not permit drinking establishments to be located close to either churches or schools. But hey, this is a kasi.

This house of ill repute happens to be owned by a successful businessman who easily could have gone in for a more salubrious kind of business – perhaps become a member of the BEE crowd. Our proprietor also happens to be the Head of Department (HoD) of the Mpumalanga Department of Local Government. Yes, you read that correctly: local government, which is now called COGTA (Department of Cooperative Governance and Traditional Affairs).

When this writer was told that the owner was in fact the HoD, a Mr Cain Chunda, I found myself guffawing in disbelief, but that mirth was quickly replaced by a feeling of disgust.

I could guess from the tavern’s name that maybe Chunda has the ambition to amass the same kind of wealth as the American billionaire family. I mean, does he otherwise really need to  impose this monumental nuisance on the community, especially considering the exorbitant salary he probably gets as HoD? Eish! The greed.

The issue had me steaming all over again when, in November, there was another murder outside the said tavern – just a few metres from the entrance to the Salvation Army Church. The victim, according to police reports, was not an all-night drinker, but a sober 30-year-old man on his way to work at 5am. When he passed the HoD’s establishment, he was attacked by reportedly drunken men who allegedly emerged from Rockafellas.

The murder again ignited the anger of neighbours who have been complaining to the authorities for years that the tavern has turned the street into a no-go zone. They say that when morning comes, the roadway and their yards resemble the Umjindi municipal dumpsite, and they are sick of it.

According to witnesses, the poor fellow who was killed on his way to work, was stabbed while being robbed – allegedly by a patron of Rockafellas. A suspect was arrested by the police. At the time of going to press, they could not confirm that he was a Rockafellas patron but witness statements point to that.

Here’s where the HoD comes into the picture: according to the Liquor Board, establishments that serve alcohol without food are supposed to close at 12 midnight; for those that do serve food, it’s a 2am closing time. Rockafellas, food or no, closes between 5am and 6am, resulting in their juvenile patrons continuing to cause drunken havoc as the community sets about their early morning business – which includes having to clean up the mess of alcohol containers scattered around the neighbourhood. 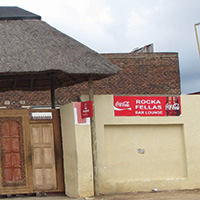 Requests by residents – including former Umjindi Mayor Musa Lingwati – to have the tavern shut down or, at the very least, compel the owner to close its doors by midnight, have inexplicably been ignored by the municipality. However, the police told this writer that they and the Liquor Board are actively looking to shut down Rockafellas, HoD or no HoD.

Now my nosey ones, please tell me: how the hell does an official of a department such as local government engage in an activity, business or otherwise, that defies everything his department stands for? And in this case the provision and/or monitoring of good governance to local municipalities, which I trust includes the provision of a safe and clean living environment for its households?

Someone needs to remind HoD Mr Cain Chunda of this. Maybe we can do it with this here Noseweek because, there’s no doubt about it: the situation and Chunda’s role in it stinks.