Infinite woman. A host of Harriets

The Blazing World
by Siri Hustvedt
(Hodder and Stoughton)

Do not be deceived. The Editor’s Introduction chapter to this extraordinarily imaginative exercise is daunting – seemingly deliberately pretentious – but key to the relationships between vividly sketched characters crowding 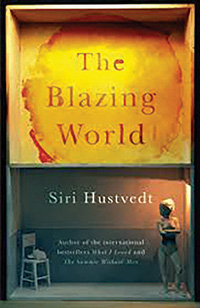 Admirers of Siri Hustvedt’s haunting international bestseller What I Have Loved will not be disappointed by Blazing World. It is a daring exercise. Centred on the wild creativity of Harriet/Harry Burden, artist/mother/dreamer/fighter/lover, it is peopled by a cast of observers and commentators on the life of an exceptional and curious human being. Curious, in the competitively fashionable New York context, is okay, but exceptional is another, possibly threatening, matter. And mysteriously unclassifiable Harriet learns this to her cost. This is a society in which self-appointed arbiters of artistic worth reign and their values are not to be challenged without peril. Hustvedt notes that artistic patronage in New York is controlled by rich white women, whose generous husbands peer in bewilderment at the latest greatest oeuvre, as ordained by the cognoscenti.

So the book is about prejudice – against creative women, impermissible art, and behaviour which alarms the establishment. But Harriet is not a classic maverick. She is a true original, and therefore threatens the manners and mores of practically everybody. A truly passionate being.

Convinced that the feeble representation and recognition of women in the arts is anti-feminist, she evolves a defiantly individual modus vivendi which confuses the self-satisfied. Distressed by the death of her beloved husband, this socially awkward being of huge talent decides to fool the society fools. She will invent a choir of men to present her art to the world. Then she retains various amiable males to perform the social ballet required for formal recognition. The public is led to believe that the men created the work.

The book consists of a posthumous compilation of texts based on her notebooks, and a range of testimonies by acquaintances, friends, her two children, and a lover.  Predictably, various critics are unable to believe that Harriet has had the impertinence to impose such an astonishing fraud on the social  torch-bearers. There are opinions suggesting that the young men she employed, and whose names appeared on the catalogue lists as artists, were the actual begetters.

Her creative diversity is shown to be so various that scepticism is understandable. She even experiments with her own sexual identity, dressing the tall lumbering body in male attire and entertaining various versions of herself. And all of this emanating from an erudite individual who knows languages, reads omniverously and yet, all too human, craves public acceptance and admiration for her art.

She certainly suffers for it. The unlikely crew of zany house guests whom she feeds in her converted warehouse/home/studio are reflective of her unique character and tolerance for human frailty.

A certain fey maiden lodger, improbably named Sweet Autumn Pinkney, contributes to the dossier, after Harriet’s death, by describing her interesting hostess thus: “I felt her like a red scream. I had to back up. I mean, I wasn’t even close to her, and I had to step backwards because she was emitting so much all at once, racing, multi-coloured, and churning, but too much red and orange.”

There is an echo here of Van Gogh’s last, mad years, unappreciated, daft, brilliant. Clearly, Sweet Autumn had a perceptive eye. Or was Vincent perhaps a woman in drag?