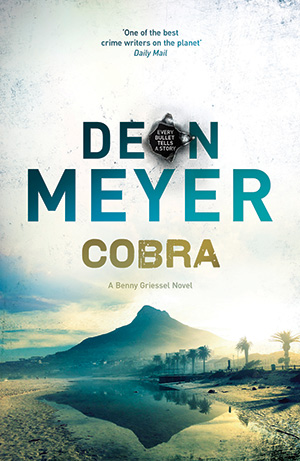 novelist Deon Meyer’s invention, is an endearing character. His personal and  professional woes provide startling insights into the minds of conflicted South African lawmen who try to reconcile duty with the confusing messages emanating from state powers.

Meyer makes it clear that police who survive the previous regime often suffer particularly demoralising angst as guilts from the past collide with new challenges to integrity. What do you do when the new overlords proceed to replicate actions and attitudes which echo apartheid era horrors?

But world-weary Bennie is not alone in his attempts to preserve decency in daily police practice: he is awed by resolute colleague Mbali Kaleni, a substantial lady in every sense. She may be given to furtive consumption of sweeties, but she is clear about the difference between right and wrong, and prepared to speak her mind on the subject.

Meyer fans will relish the reappearance of his colourful crew of crime-fighters, including Griessel’s dauntless sidekick Cupido, who is obsessed with historic resentments, stylish grooming, and fluent Mitchells Plain abuse. He can gooi the taal to devastating effect, Mbali’s fierce indignation notwithstanding.  The lady is convinced that rude language constitutes an offence against national propriety. She may have a point.

And who is the villain who challenges our heroes to solve this dramatic high-speed thriller mystery? X visits death and destruction on sundry familiar sites, eg Cape Town’s glamorous Waterfront precinct. Our tourism authorities will blanch at the notion of such desecration, but the tale also has international reach, with rich and powerful baddies colluding to suppress the facts behind a string of  whodunit murders, chillingly portrayed.

The amusing wild card is a nervous young pickpocket named Tyrone Kleinbooi, who is going about his unlawful business when he coincidentally witnesses bloody mayhem. This picaresque orphan youth learned his trade at the knee of a professional. And he’s silky smooth at the game of extracting wallets from distracted citizens. Well, mostly tourists, actually.

But he knows too much about the murders, and all his slippery skills come into play as he dodges both cops and robbers in a dangerous game of hide-and-seek.

Meyer famously knows police characters and practice, and he researches diligently.  The train service is vital to the plot, and the author treats us to some breathless Third Class rides, plus hectic pursuit through back alleys and winelands. Cobra is perfect movie material.