And lo, it came to pass that I was granted a scholarship to study mural painting in Germany. Why? I can’t quite remember why. I’d given a talk somewhere on the technical side of Italian wall paintings – you know, Giotto, Michelangelo, that lot – and maybe this had caught the imagination of the Fine Art fundis, a new slant on it all. I mean, all those creepy chemical words gave an exciting new view of things: Calcium carbonate, Calcium oxide (that’s the quicklime they used to dissolve people’s bodies after they’d been hanged), Calcium hydroxide, lovely mysterious names. Ordinary ol’ water became Aitch two oh, two atoms of hydrogen, one of oxygen. It all sounded so profound. 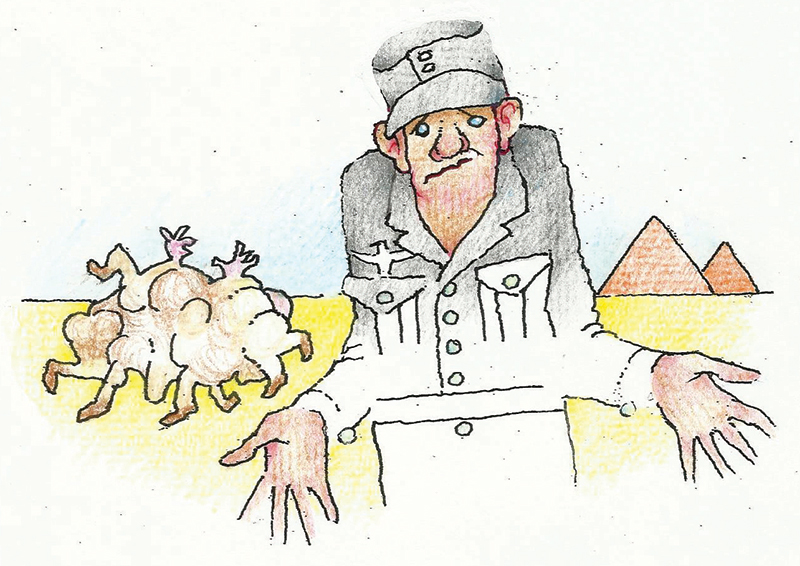 But why Germany? Because the Krauts are so bloody good at technology you’d wonder how they lost the war, that’s why. In Stuttgart they had a special Institute for the Technology of Painting, one of only two in the whole world, the other being in Chicago, but I didn’t want to go there and hear again (and again) how the US had won the war.

Early days, these. 1949. I arrive by train from London. Bits of Stuttgart stand all about in heavy snow. The big bits, that is; all the small bits have been scooped up and deposited on something like an old-time Joburg mine dump, with sports fields up top. The railway station is a platform plus a sign saying Stuttgart. That’s all. No roof, no walls.

I trudge off boldly like King Wenceslas towards Weissenhof, where stands the Staatliche Akademie, and present myself at the Institut für Technologie der Malerei. Ha! Herr Schtrachan, says Frau Zimmermann, secretary, Willkommen! Welcome indeed; I’m registered as a student and all that side of things okay, but no money. No word from the scholarship people. Nothing. I walk outside and make a plan. How the hell now? I’ll go to the Polizei and declare myself a displaced person and get deported back to London.

And as I stand alone and desolate in the snow a certain first-year student name of Lanski, 35 years old, Stalingrad survivor, comes up to me and says What gives with the long face, Mensch? I tell him my sorry tale and he says Es macht nichts, it is nothing, you will come and stay with me. Which I do.

His Onkel August has a smallholding outside the city and Lanski lives in the tool shed ’mongst cherry trees and cabbage patches. Onkel August has allowed him to build an upper storey with old planks and stuff and above that, a loft for firewood, and in this loft I take up residence. Below me a gentlemanly old refugee professor of art from East Germany resides ’mongst further firewood. On the ground floor is Lanski und Frau and two pretty little girls Gretl and Bärbl plus the wood stove that heats up the whole shed.

This smallholding is but one of many which constitute quite a village, all have reconstructed tool sheds on them and all are occupied by left-over war-surplus troops with wives and kids.

Common soldiers all. Friday evening was visiting time, small groups with small parcels of food: here some eggs, there some flour, a pie made of Onkel August’s cherries, a bit of meat, you name it. Some wine too. And of course always the talk turned to the war, stuff I really didn’t want to hear, especially since after a bit I found myself on the wrong side, starving, my head freezing in a grim German Stahlhelm as the Volga froze over and half a million fresh young Siberians with cosy sheepskin clothing came thundering over the river to get at me. There’d be a little embarrassment on my behalf now and then, and a polite silence. And after one such, a nice youngish bloke, name of Karli, says to me, he says, I have been in Afrika where it’s nice and warm, also I met some Südafrikaner there. 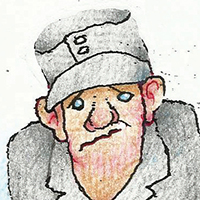 They took my whole company prisoner as we were trying to flee El Alamein, about fifty of us. They packed us into troop carriers and took us off a couple of hundred kilometres east to a prisoner of war camp, a city of tents where we climbed out and formed up in marching order with a dozen-or-so armed escorts. Then as we approached these tents, we saw another column of prisoners with New Zealand armed escorts heading the same way, when quite suddenly the South Africans and New Zealanders all yelled SCRUM! and just abandoned us and started pushing each other about in a great heap on the desert sand. I mean we could easily have run off, nicht wahr, and what then?