When I was handed the reins of a farm called Oorschot in 2009, I was overwhelmed with excitement. But that was soon drowned in frustration. Nothing was easy, the problems were endless. Fortunately all that was tempered by the wonderful, therapeutic feeling one gets from being in the wide open countryside.

Working on the farm has most definitely been one of the most fulfilling experiences while at the same time the most trying. As many of those in the know about farming in the Barberton area have pointed out to me, it’s no pap en vleis. But then again I also learned that ’n boer maak ’n plan. So with that as my motto – and with the help of my loyal assistant, Enock Sibiya, I have turned what was 63 hectares of neglected farmland, fields overgrown with grass, trespassing cattle, stolen fencing and generally vandalised infrastructure, back into a farm that would make any khaki-clad boer offer us a Klippies and Coke.

So, I am ecstatic at the progress that has been made thus far. However, if truth be told, I know I must savour this moment while it lasts – before we proceed with the planting of the planned cash crops and lemon orchards.

Savour the moment by just standing there, gazing at the fields, walking the perimeter on my routine fence inspections (I must get a farm dog to really enjoy this walk). And let me not forget to mention the view from the second- floor of the house.

Like I said, I might as well enjoy it all now because, once the planting begins, I can see this wonderful farm life could very well be constantly interrupted by the personal problems of employees; problems that include the likes of family funerals and of course birthdays. Yes. Birthdays.

I was warned about these traditional farm employee… er… requests. And indeed it was not long before I was hit with them from my loyal Sibiya. First it was running out of mealie meal in the middle of the month, then his wife needed money to attend to a death in the family – I thought the family was in Mozambique but they were right here in Barberton’s Emjindini Township; heck she could have walked there from the farm. Then it was a birthday.

Birthday what? Now I went ballistic. Nosey readers, I could not believe this. You see, whenever I am away from the farm and I get a please-call-me from Sibiya, the first thing that comes to mind is, “What the heck is wrong now, runaway fire or what?”.

So on one particular day he buzzes and I call him back immediately with worry, as I always do.

He answers and says, “Hold on, someone wants to talk to you.”

Someone wants to talk to you? Ok, I’m thinking to myself, it’s a government official making a site visit,
Eskom maybe, or whoever is relevant to the current work taking place. But no, it’s his wife who wants to tell me she’s celebrating her birthday today.

“Give Sibiya the phone,” I said.

“Hey,” I tell him, “I don’t even celebrate my own birthday and, anyway, where is the money for your wife’s birthday gift supposed to come from? This bush that we have to clean up? You work for me, not your wife!”

Savour the moment I tell ya. 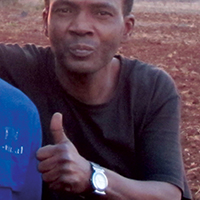 Alright, so much for self-praise and fears of what’s to come. It remains for me to give thanks for what I consider to be a very sound land-reform programme – and this is not coming from Bheki the beneficiary, but from one  who is well aware of the many conflicts over land around the globe. Heck look at our neighbour, Zimbabwe.

Moreover, the extensive coverage I did between 2008-2009 on land claims in the neighbouring Badplaas area gave me an understanding of the challenges faced both by beneficiaries and the government with this land thing.

First, looking at what we have done to bring Oorschot farm back to life, I cannot understand how others have destroyed productive farms – especially given all the support the government has thrown in, moola, training, technical assistance, you name it.

Second, I can understand how the government has slowly tightened the strings. For anyone who believes that, or better said, has the illusion that the government land-reform grants are a source of wealth or easy money, they are mad.

Maybe a few years ago – through corrupt practices of course but, now, they can be really stressful, what with the requirements for endless reports, not to mention the constant phone calls from officials about your progress.

Fair enough, it’s tax money and we must account. And it’s a small price to pay for having the pleasure of working the land – and being able to look at myself in the mirror and say proudly: “’n boer maak ’n plan”. Ah! Yes, I am savouring the moment.