Dark heritage. Maggie to the rescue

Charlotte Otter has done a courageous and intelligent thing. Balthasar’s Gift (A Maggie Cloete Mystery) is a rare excitement – a thriller entwined in a compelling reincarnation of South

The German connection seemingly came about because Otter, previously a KwaZulu-Natal journalist, is now based in Heidelberg, where she works in IT corporate communications, and lives with her husband and three children. Friends say she is an engaging companion, wholly unlike her feisty heroine. Perhaps life beneath the romantic heights of Heidelberg’s castle doesn’t quite measure up to the hectic thrills of corrupt gamesmanship in KwaZulu-Natal.

Otter reiterates that ex-president Thabo Mbeki’s delays and suspicions of dark foreign plots caused Aids chaos, but her focus on the suffering caused by vultures who exploited the confusion is a heartbreaking tale. The vast majority of South Africans, weary of  the politics of greed and personal power, prefer to consign memories of the outbreak of the Aids crisis to the back burner. It’s all too embarrassing. Too horrific. Balthasar is a timely reminder of the ghastly truths that simply won’t go away.

Otter tears into the hyenas who profit from the Aids mess, the gangster promoters of fake cures, the “incidental” mark-ups for coffins and scandalously high-priced loans for funeral expenses.

But the most terrifying, and ongoing, aspect of this plague is the damage to orphaned children, including the rapes of tiny mites by ignorant men seeking cures.

So Balthasar is a heady mix of the consequences of historic tragedy, featuring a crew of sinister exploiters of all races – and then there’s the indomitable Maggie Cloete to cheer us up with her fierce search for the facts of guilt.

She may be the despair of her newspaper seniors, who fear that her brusque idealism 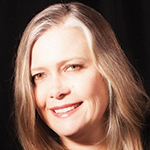 will provoke official displeasure, but Maggie is admired by her colleagues. Otter’s portrayal of classic newsroom characters is amusingly accurate. Her portrait of a gutsy heroine riding to the rescue on her beloved Chicken (don’t ask) is both affectionate and convincing. Will Maggie, always in the dwang, find love and expose the truth? Not if she over-indulges in too many suspect KZN curries, burgers and booze. But there is hope and idealism behind that battered exterior.

The denouement is a shade too Gotterdammerung (a whiff of operatic Heidelberg?), and there are the odd typographical blapses, but it’s a riveting read.

We must hear more of Maggie.