Back in historical times, 1950s, I had a dinky little bachelor flat on the beachfront and a very advanced three-speed bicycle. Durbs still had a touch of East African romance about it. I’d ride to work along Queen Victoria’s Embankment with its coconut palms, here the Sea-Scout jetty with yachts, there a flock of flamingoes, then a circle of pelicans doing their strange headstand fishing and, over the way, the small ships of the whaling fleet hove to at the factory slipway with its old steam locomotive. And here I go, off to earn an honest crust.

Teaching art? Bloody hell, man, you can’t teach art. What you might try though is to disinhibit 18-year-olds of all the crap that is laid on kids in infancy. You know, the poor little buggers get a colouring-in book for Christmas and a box of crayons, and Ma says No you mustn’t go over the line like that and No, bunnies are not blue. Those are mistakes. Sins. Then when they understand the morality of it all they’re given a sketch book and a pencil and rubber and told to go and copy Nature without mistakes for colouring in without mistakes. So by the time they hit 18 they’re proper zombies and just ready for Geordie Howe’s Proper Advanced Art School. 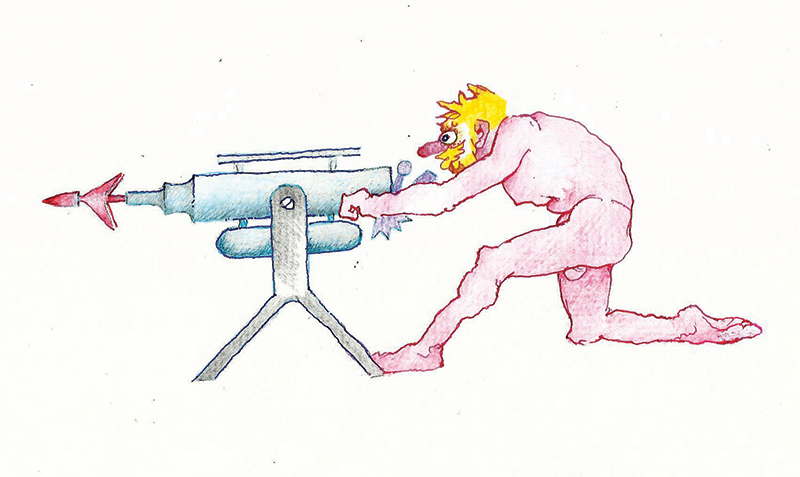 Geordie Howe was a mid-age pudgy Pom known here mongst art students at the Natal Technical College as Ol’ Mudguts, and his ambition was to run his department like the Slade school in London. At the Slade, by an ingenious method of triangulation, you were able after four years to copy a nude model without a single mistake. You used your pencil as a measuring rod, see, holding it at arm’s length in the direction of the model and closing one eye as you placed your thumbnail against a certain dimension and then comparing that against other dimensions. Also you used your pencil as a level and a plumb-bob, indeed some students had a piece of string with their rubber dangling on it for vertical measurement and one bloke actually had a small, small spirit level for the horizontal.

Thus equipped, in no more than an hour you’d have 100%, fit for a diploma. All drawings were the same size, known as Sight Size, because that’s how big one saw the model. I noticed that Slade students’ arms were all about the same length, but let it pass. I was a visiting friend of the maestro, you understand.

From an agency he’d got for a model a pallid woman with false teeth, who for all her nudity was nice and warm for the first time that day in the depths of a grim London winter. We settled her in a comfortable pose with classical drapes upon which to sit. Bad mistake. After a bit her eyelids drooped and her mouth opened. After another bit the upper denture fell clack on the lower, she gasped and lunged forwards to bite the choppers back into position and the whole studentenschaft gasped Oh no! you’ve moved your feet! All fell to argument about how much, and the model, dear soul, burst into tears.

So here we all are in Durbs, pissed-off students and their object of off-urination Ol’ Mudguts, and we struggle to overcome the mutilations of childhood. But there’s one who appears to have no mutilation, name of Poppy Pegg, whom you’d call sort of dof, too onnosel to suffer it. She’s scribbling away over there all on her own, not even looking at the model, and I drift away from the psychotherapy and take a peep at what onnosel stuff she’s doing and... and... she’s doing me! Nude! She isn’t using the model at all. I never knew I looked like that to the outside world! She’s a natural, I tell you. But like all Nature’s crafty creatures she’s ephemeral. By the very next class she has simply disappeared. Nobody knows where. The police don’t know where. Mrs Pegg says Well that’s Poppy, gone again. Ah well. 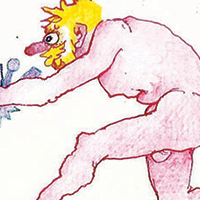 And blow me down, six months later she’s back, and sommer sets to in her old corner of the Figure Drawing Studio as if nothing has happened. Poppy, say I, you look so healthy and happy, why have you not come back from your travels with a nice tan? Because I’ve been in the Antarctic, says she. I blink. What next? Seems she’d quietly climbed aboard one of the whalers at the slipway and when she revealed herself a hundred sea-miles distant the skipper said stuffed if he was going to turn back to Durban if the crew were willing to keep quiet about things. Which they were, bejasus. So there she took over the cooking of whale steaks with spuds, onions and plenty fat, and that’s why presently she has such a nice glisteny glow to her complexion.

Let’s see what you’re drawing, say I. And there you have it: figure drawing in the raw, a crewman firing a huge harpoon gun, starkers. She continues thus over the weeks: crewmen at every job of their trade, active, vital, these lads. No posed models. All nude. Dozens and dozens of drawings. Poppy, said I, you’re very welcome here, but why do you come to Figure Drawing at all? I need the diploma, says she. Diploma sucks, if I had my way I’d give her Geordie Howe’s job.