Pay dirt. Doctor in the house

Give a cheer for my friend, the EFF member Doctor Younis Vawda who, disenchanted with the ANC, had jumped on the Malema bandwagon. The move has paid off handsomely for the doc, but not before a slight scare. You may recall I’d said I feared being inundated with calls of frustration if the doc were to make it to the Mpumalanga legislature. Well, he did not. The red-beret-and-overalls brigade only got two seats in this-here ANC country, Mpumalanga, thus leaving the doctor out of any seat contention.

And did I receive a call from the distressed doc? Of course I did. And yes, the man was very disappointed at the results, for he had been truly looking forward to taking the legislature by storm. And knowing him, he would have done just that.

But not all was lost. A few days later the good doc called again, jubilant this time, to inform me that he had been deployed to Parliament – to the National Council of Provinces (NCOP) to be exact. I did not believe it. I thought the old boy was pulling my leg – until we were smacked with a photo of the doc in Parliament, published by a national Afrikaans daily, Die Beeld. The photo made the rounds so quickly in Barberton, all one can say is: talk about Andy Warhol’s 15-minutes-of-fame comment. And certainly it did not hurt that our good Dr Vawda was dressed to the hilt in EFF garb. Then take the Muslim-beard factor and, man, what a photo opportunity for a scribe with a sharp eye. If they say a picture is worth a thousand words then that photo was worth 10,000 laughs. Sorry Doc!

However, I felt I just had to rain – or at least drizzle – on the doc’s parade, so I threw in: “But you do realise that you most likely will not make the impact you had hoped for your beloved Umjindi while serving in the Council of Provinces? Someone like you should have been sent to the Mpumalanga Legislature instead of one of the two representing the EFF in the NCOP. After all the NCOP is more of a rubber-stamp body, ratifying legislation or bills passed on for final consideration from the National Assembly.

“Be that as it may,” I continued, “If I were you, I would use this opportunity as a lobbyist, in other words there are quite a good number of corporate entities based in Cape Town that I would try to befriend for the sake of persuading them to invest in Umjindi. After all, your passion is economic development and not political upward mobility.”

Will my advice be heeded by the NCOP EFF doc? Eish, who’s to say. 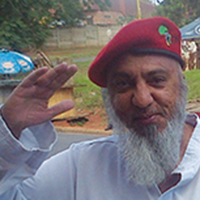 Now, my loyal followers, allow me to share with you another follow-up. And this one gives me the greatest pleasure because it has truly uplifted the community of Emjindini, Barberton’s township.

Some time ago I wrote a piece about how our distinguished Mayor Lazarus Mashaba was allegedly derailing the development of a shopping complex; the complex developers had made an offer to purchase a piece of municipal land adjacent to theirs. How foolish, as if our honest municipal office-bearers would simply say “Yes, go for it, it’s good for the community”. We all know it has to be “good” for them. The development is still non-existent, three, nearly four, years later.

However, the community has been saved – or given good news – by the recent development of a U$ave Shoprite market. And get this, it is to be situated just up the street from the derailed complex which was to have a Spar supermarket as its anchor tenant.

So why is this so good for the community? Well, as we all know, township residents have had to endure the cost and time-consuming exercise of going to “town” for such needs.

All I can say is, the times are truly changing. The U$ave has been bustling ever since its opening. If we want community development, particularly as far as business goes, let’s leave it to the private sector and keep the not-so-distinguished office bearers out of it.