The reviled Dr Albert Hertzog was right after all. Mature persons will recall the former Minister of Posts and Telegraphs’ desperate attempts to forbid TV and all its works in South Africa. Equally desperate and bored citizens raged against the verbod for years before the regime caved in and permitted us to view sinister productions like Biltong and Potroast and Liewe Heksie.

Now along comes Joe Moran to question the effects on communal life of Dr H’s derided little black box. It seems that, instead of binding the nations of the world in glorious harmony, TV is isolating families and individuals. Moran should know: this formidably accomplished British writer and academic has researched mightily to produce Armchair Nation, which seduces the reader with a treasury of witticisms while subtly imparting fascinating research. 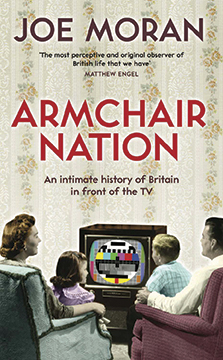 His take on voyeuristic pop TV series like Big Brother and The Weakest Link is amusing, but more than faintly alarming as it notes fan adoration fading to passive goggling for the lonely sleep-deprived. High-minded commentators – who imagined TV would educate and elevate a grateful world – are shown mostly to have become disillusioned about those prospects. The people have spoken, the advertisers have heard, and it seems the populace are generally not too keen on improving themselves.

Moran is not being sniffy about popular taste. This professor of English and Cultural History at Liverpool John Moores University, who writes regularly for The Guardian, records with wry amusement the innocent early hopes for TV as an uplifting social leveller.

Television did start out as a communal activity in Britain, with major events like Queen Elizabeth’s coronation and the first Moon Walk being witnessed mostly on tiny screens in crowded spaces.

Among the memorabilia recorded in Armchair Nation is an account of the first TV play broadcast in Britain: on 14 July 1930 Luigi Pirandello’s The Man With a Flower in his Mouth was shown. The technical difficulties were enormous: the viewing area was so small that only one actor could appear at a time. Fortunately it was a two-hander, so, as the Daily Mail noted excitedly, viewers saw “even to the lifting of the eyebrows”. The Manchester Guardian’s reporter apologised: he missed the performance because he arrived at the head of the queue at Selfridges store just as it faded out.

It has been suggested that the mass purchase of TV sets in Britain in 1953 was sparked by coverage of King George VI’s funeral, when the largest number of viewers yet, some 4.5 million, watched the procession in shared sitting rooms across the country. But there were reservations about permitting cameras to reveal intimate moments of the ceremony. Some felt the coverage was too intrusive when, for instance, it dwelt on the Queen’s veiled face.

Moran quotes playwright Dennis Potter liberally. Potter got the job of TV critic through illness. The young reporter became the Daily Herald’s viewer when illness forced him to sit at home and watch everything from Wagon Train (liked) to Emergency: Ward 10 (great stuff). At the time (1961) ATV permitted scriptwriters only five deaths per year. By 2014 standards, that limitation would be exceeded in South Africa within milliseconds. And that’s just on TV.

The idealistic young Potter, of modest origins, then proceeding to Oxford, had hopes of reaching both his parents and university friends through TV, rather than the “middle class” medium of theatre. He yearned for at least the possibility of a common culture in Britain. But he knew the dominance of the “undemanding pap” he had peered at from his sickbed.

Encouragingly, Moran believes the habit of communal viewing is now turning out to be much more resilient than people had "hoped or feared" at the beginning of the digital era. He says programmes like Who Wants to be a Millionaire?, Strictly Come Dancing and Doctor Who, bring families together.

Judging by that menu, touring Brits must feel right at home  in South Africa. For a touch of the exotic, they could switch to one of the other ten official languages.