Doing time. I shall be released

Way back then, in 1460 to be inexact, an Italian gent name of Andrea Mantegna produced a great big tempera/oil painting called View of a City, of such precise perspective as to cause people to do what cats do before a mirror, to raise their hackles and peep behind the surface to see what was going on there. It was a bit spooky, this new thing; it enabled a three-dimensional world to appear on a two-dimensional surface. If you could see something in the round you should be able to touch it in the round, not so? Lucky the church didn’t nail him for sorcery. But such is the power of bigotry that by the late 1800s if you hadn’t mastered the multiple lines of one-point, two-point, nay even three-point perspective drawing and the whole formal crap that went with academic art, you wouldn’t make it past your first year in any art school in Europe, its colonies, North America or Mother Russia. It took the heresy of the Cubists and Paul “Kgeenie’nvokomnie”    Cezanne to break the stranglehold of perspective laws in art. 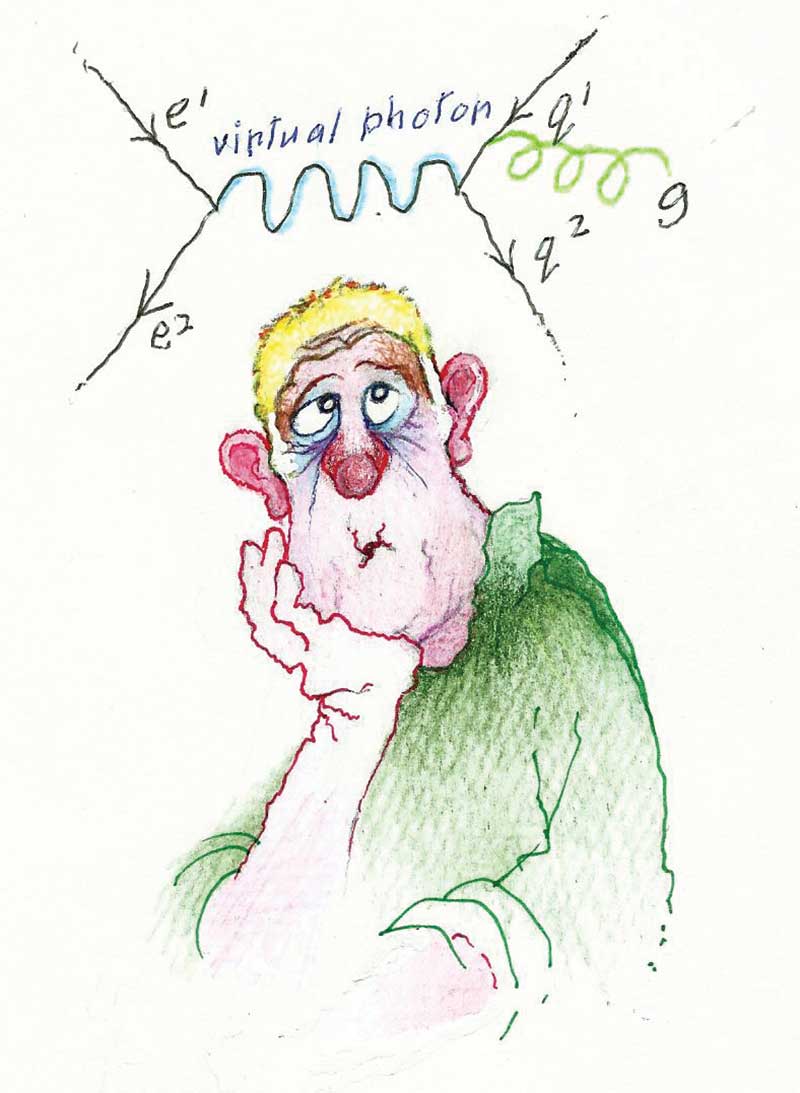 But lo! Give it a decade or two, or three, well actually four, and along come some serious scientists who dig about at the tiniest level of things in search of the nature of Nature, among them a rapscallion physicist Richard P. Feynman who doesn’t believe things the prescribed way and says as follows: Study hard what interests you most in the most undisciplined, irreverent and original manner possible. He makes for us a famous set of diagrams, pictorial representations of the mathematical expressions governing the behaviour of sub-atomic particles. Many lines on paper, and lo! some of them dip in the wrong direction, which implies – dare we say it – negative time. Many momparas of the media fall gleefully upon these diagrams, where time is represented as a line, and declare if you can fold a line back on itself you can also fold time back on itself, like a sheet of paper, and then you can get a wormhole through the two, and just wait a bit while we build a hell of a clever spaceship to shoot through this hole and emerge in the past. They present us with a pic of it all: a two-dimensional diagram of a three-dimensional diagram of a four-dimensional universe.  Reverse time-travel – the cat can exist backwards and study its own tochis.

Well, now. In the Pretoria Central Prison there was a library with 5,000 books, and if you got privileges for good behaviour you could use it. The Prisons Department didn’t actually buy the books, hell no; any institution or person could sommer donate them to PCP, and a bandiet couldn’t actually browse in the library, that’s freedom, the librarian would mos bring two books a week to this bandiet’s cell, to avoid the smuggling of tobacco, see? I mean one of my first two was on how to get a driver’s licence in Pretoria in 1934, but the librarian was a dear old soul name of Oupa, 70-plus years, pushing his second indeterminate sentence, but sensitive, and he thought I might like something of a technological nature. As for himself, well, this library wasn’t the sort of place where you could study quantum physics, naturally, but Oupa had a sharp intellect and he’d come across something by Feynman among a load from the Pretoria Girls’ High School, and determined secretly to devise a wormhole in time and escape from this vokken tronk. All it needed was deep thought.

Of course every bandiet soon enough heard about Oupa’s scheme, it became the year’s best joke where there’s precious little to laugh about. Oupa became more and more introspective and silent as he was mocked, then after much much time suddenly... just disappeared, completely vanished. Overnight. The news spread instantly: Oupa had mastered the Feynman diagrams.

As time flies, so it fled. Tempus fugit, another three years of it. My time was up. The Prisons Department never told you anything about their plans for your movement, I was scarce surprised they didn’t just open the door and kick me out in the street, but of course I’d forgotten: I was under ten-year house arrest when sentenced and that’s what I was going back to, in Durbs. But it was weird travelling without leg irons and handcuffs in an ordinary car. At Harrismith they stopped for lunch at the prison, I was given a small boep loaf called a katkop and a bottle of cold coffee made of beans unknown 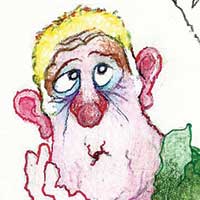 to botany and told to wait in the atrium ’mongst the aloes in pots. Great day, real plants, suddenly appears Oupa, back from the whencetoforth, all smiles. Yirra, Oupa! ’kse, how’d you get here, man? No, says Oupa, they said I was too old for Central, I couldn’t get up once I was lying on the floor so I should have a bed, but everybody would want one and it would cause discontent, and they couldn’t sommer release me because I would go and print more banknotes, so they moved me here for an office job. But it’s an uptoshit boep, all the ouens are short term and a man got no chinas. All my chinas are in Central.

Well what about a reverse wormhole? say I. Ag nee wat, says Oupa, that’s all bullshit, I’m asking God now to take me back to Central. Maybe you will pray for me, hey? Well I haven’t tried it since I was 14, say I, but I’ll give it a crack.