In June 2012 Noseweek reported how, at the instigation of his angry ex-wife, various policemen (and women) with a deficient knowledge of the law had arrested and detained Johannesburg businessman Lionel Greenberg – unlawfully – no fewer than seven times over a seven-year period.

It all began in June 2000 when Greenberg was arrested for the first time at ex-wife Dora’s instigation by a Sergeant Du Preez and detained at Edenvale Police Station. By the time the last of the arrests took place in 2007, Lionel had spent a total of 42 days and nights in prison or police cells, generally over weekends.

(The trick was to get him arrested on a Friday afternoon, so that he could only get help and negotiate his release come Monday morning. On one such occasion he barely managed to secure his release on a Saturday in time to attend his son’s Bar Mitzvah.)

Did he collapse in a heap under the weight of all of this? No. First he set out to conquer Kilimanjaro. Then, on his return – with the requisite photograph to prove he’d made it to the summit – he set about the more serious business of suing the police who’d arrested him – all on bad warrants or without reasonable cause. (Sensibly he also sued their boss, the minister, with the money.) One case after the other.

When Noseweek first reported on these events, four of the cases had been concluded, all of them in his favour. Another three were in the offing.

The case arising from his first arrest was among those outstanding. That, too, has since been concluded in his favour: in March last year the South Gauteng High Court awarded him a further R30,000-plus-costs for wrongful arrest. Judge P Meyer found that the police officers at the station where Greenberg was arrested did not understand the conditions under which an arrest may be made without a warrant in terms of the Domestic Violence Act. There had been no violence threatened.

But for the most part, 2013 was not such a good year for Lionel: in January he was diagnosed with cancer: a recurrence of the Hodgkin’s lymphoma that had been in remission for several years. From March to May he had bouts of chemotherapy, followed by a stem-cell transplant in July. That and a nasty opportunistic infection saw him in ICU for 10 days and on a walker with oxygen for many more.

“I saw the white light and the blue cathedral,” he tells Noseweek, “but it was peaceful”.

Despite his visit to the blue cathedral, he still managed to write five exams in his Unisa law subjects – and pass four. (He attributes most of his knowledge of the law to hard experience.)

More-or-less in celebration of his coming through on both the health and academic fronts, on 7 November Acting Judge Mali of the Gauteng High Court issued the sixth court order in his favour: policewoman Deidre Venter and/or her boss, the Minister of Safety and Security, were ordered to pay Greenberg yet another R50,000 in damages, plus costs. 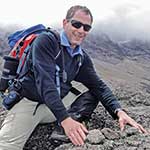 In that case, Venter had “out of the blue” arrested Greenberg at the Johannesburg Magistrate’s Court and secured a warrant to have him admitted to Sterkfontein Psychiatric Hospital for observation, based on a statement in which it was falsely alleged that he was a danger to others, behaved irrationally and that he had previously suffered incidents of mental illness.

Two arrest cases are still due for trial, while his case against the sheriff for allegedly having improperly registered a caveat (a legal cautionary notice) against his property, preventing him from registering a bond against it to settle his ex-wife’s divorce claims, is part-heard in the Gauteng High Court.

Talk about the odds!