With high unemployment being the scourge of most municipalities, including Umjindi and Albert Luthuli, you’d think that any local authority would grab the chance to accommodate interested investors who might bring more stability and prosperity to an area.

In Umjindi it seems the opposite applies, judging by the way one such example that was guaranteed to bring jobs has derailed.

Two highly capitalised investors – a group of Pretoria businessmen in partnership with a local “black” entrepreneur; and Barberton’s Pick n Pay – were given the run-around after each had presented their respective business initiatives to the municipality.

The first entity, which operates as Fontis Development, a well established property development company, and their local black partner, Vusi Nkosi, made an R800,000 offer to purchase land on which the burnt-out Emjindini SMME Centre once stood. Emjindini is Barberton’s township, or ’kasi (and of course, since the fire, now home to a lekker spread of African urban bush).

The SMME centre was burnt out during service delivery protests in June 2012. Afterwards several councillors told this writer the municipality had no intention of rebuilding the centre, let alone had the funds to do so.

Ironically one of the issues of contention expressed during the protest was Umjindi’s failure to deliver on Local Economic Development (LED) which would naturally lead to job creation.

The Fontis plan was to build a shopping complex for which it had secured a Spar supermarket as the anchor tenant. The idea was to combine the derelict plot with the adjoining stand, owned by the aforementioned black entrepreneur Vusi Nkosi, allowing more space to accommodate what they described as “a state of the art shopping complex for the township”.

While Fontis could not say exactly how many jobs their development would create – both in the short term (eg construction workers) and in the long term (part-time and permanent jobs) – they said that, “with any such project one can imagine that capital injected into the Umjindi economy would be in the hundreds of millions and the Spar, alone, could offer up to 50 part-time and permanent jobs combined.”

The council – reported to be virtually broke – is said to have been delighted by the Fontis proposal and highly impressed by the subsequent presentation which included the full development plan, architectural designs and, importantly, a list of secured core tenants including the prize anchor, Spar.

As a result the developers were given the green light to undertake an independently conducted evaluation.

Fired by the positive response to their presentation the group quickly complied and waited, fingers crossed, for the green light. One, two, three months went by before they were given a rude awakening: they were told the municipality had received a counter offer.

A counter offer? How would anybody have known to make a counter offer when there was nothing publicised about the sale of the plot, let alone that the municipality had at no stage put the plot up for sale?

It is widely suspected that Mayor Lazarus Mashaba or Speaker Vusi Mkhatshwa, or both, working in harmony, saw this as an opportunity to hold out for a “better offer”.

But in these parts such stalling tactics are easily misinterpreted.

When this writer interviewed one of the counter-offer group’s directors and asked how much capital they had to inject and what tenants they’d secured, their response was, “we are putting these things in place”.

The Johnny-come-latelies told the council during their presentation that they were in discussions with Vusi Nkosi for his piece of the land.

Not so. Said Nkosi: “I said to them, you guys are mad trying to use my name. No way in hell would I be part of your so-called counter offer.”

On the other hand Fontis Development’s impressive website, alone, shows it is an established property development company focusing on the development of retail shopping malls in rural areas.

Fontis claims that the shopping malls it develops provide residents with the convenience of large national retail outlets within easy reach by bus or taxi.

A councillor who asked not to be named for fear of victimisation said, “To nearly every councillor there was this feeling that the Fontis purchase offer was a godsend – all the more so, knowing that the municipality was not in a position to do anything about the centre’s destruction.”

Another councillor, who also asked not to be named, went as far as putting the blame squarely on Mayor Lazarus Mashaba, dubbing him, the “let’s-talk-over-lunch mayor”. 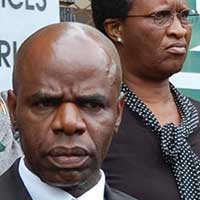 At the time of going to press the plot had not gone to tender and no business entity was known to have been granted purchase rights. And the derelict SMME centre remains an eyesore.

As for Pick n Pay, a year ago they had made an offer to buy a rather small piece of land situated between their existing supermarket and the town’s swimming pool. Their plan was to expand the supermarket.

Surprise, surprise, they fared no better than the Fontis Group and have also been given the run-around. Except on one occasion earlier this year when the mayor agreed to meet the owner of the supermarket complex.

However, instead of the scheduled meeting, he was told Mashaba was not available but would be willing to make time to meet him alone over lunch.

The plot still stands empty and Pick n Pay appears to have accepted that it won’t be made available.

Umjindi can kiss goodbye to a few more jobs for locals at Pick n Pay, which already employs about 200
people.

And of course hamba kahle to the potential jobs that would have been created by the Fontis development and employed desperate Umjindi youth who will continue to linger in the ’kasi, jobless.