We met in London circa 1969. I didn’t like him. The extraordinary Vladimir Tretchikoff came across as a dodgy second-hand car dealer of possibly Ruritanian origin. The Russian accent blurred communication. It was an unsatisfactory interview. 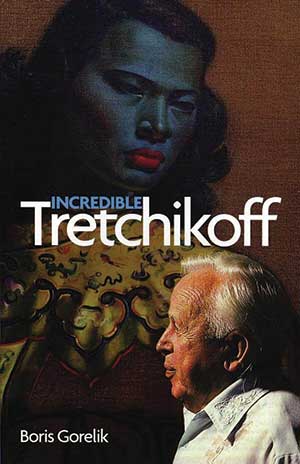 Now, reading Incredible Tretchikoff, there is respect for The People’s Artist, a frantically vigorous survivor of hair-raising experiences in half the world’s trouble spots. Never mind the art establishment’s sneers at the begetter of the emerald-hued Chinese Girl portrait; remember him as a hero of the admiring masses who knew nothing of his youthful battles against a variety of wartime enemies. They simply worshipped his paintings and made Tretchy a rich man.

His latter-day reincarnation as a bankable artist, after years in the doldrums, must be infuriating to the mockers. Admittedly today’s new fans are a chic minority, but the collectors are once again doling out six-figure sums for the familiar originals, and good money for decent prints.

The book traces the beginnings of the defiant little serial immigrant’s rage to succeed. It moves at speed from the grim realities of an impoverished childhood in Siberia, to scrabbling for a living in Kazakhstan, China, Paris, marital bliss in Singapore (till the bombs rained down), and Japanese detention in Java.

His wife and daughter fled into the unknown at the beginning of hostilities, and it was long after that he discovered they had landed up in South Africa.

Russian nationality (despite a lack of ID documents) proved useful, as the Japanese were not at war with the Soviet Union and Tretchy, the young commercial artist, was released to help produce posters and leaflets. The invaders wished to impress the Javanese as leaders of an Asian power bloc.

During this period the painter met the sultry Javanese Lenka, subject of a couple of smouldering portraits, who became his lover. They both knew they would return to their absent spouses, if and when found.

After all that upheaval, and the subsequent struggle to set up anew in South Africa, it seems distinctly unfair that such a tenacious individual should end up being vilified by the artistic establishment of the Western world.

The eventual mind-boggling material success (second only to Picasso’s then, in terms of annual earning from paintings and prints) elicited a sustained  storm of insults from the keepers of the flame. It must be galling to Tretchy’s detractors that now, years after his death, the object of their rage is enjoying a funky reincarnation in chic international circles.

Boris Gorelik has written a meticulously researched biography, which offers a reasoned defence of a complicated man and his creations. It also catalogues furious denunciations by those who so bitterly resented the flamboyant painter’s successes. Some day, perhaps Hollywood will see fit to dramatise the extravaganza of Tretchy’s life.

Not that it needs much dramatisation. I see Robin Williams in the lead. He would be particularly capable as the artist who unashamedly counted the takings at his giant exhibitions in furniture stores at home and abroad. Harrods was a huge success. The thousands who queued to see The Dying Swan, The Lost Orchid etc, are the stuff of shopping legend.

While “proper” artists mocked, Tretchy swanned about in fancy cars (his powder-blue Cadillac was borrowed to cart Britain’s Harold Macmillan about when the British PM called on Cape Town to deliver the Winds of Change speech).

Relishing a lavish lifestyle is surely understandable, given the past rigours of Siberia and dusty Kazakhstan, the horrors of wartime Singapore and Indonesia.

Tretchikoff has variously been dubbed “the Barbara Cartland of art” and a popular spell-binder.

The artist’s only comment was that he understood what ordinary people wanted. He certainly did. And he gave it to them at a negotiable price.