UPDATE:Deal on the cards for Bompas Rd development

Stuart Grant, owner of the controversial development at 1 Bompas Road, Dunkeld, Johannesburg, which featured in nose170, has offered the objecting neighbours a compromise whereby he reduces his plans by one level and moves that bulk – about 450m² – to the west side of his building. By the time of going to press, however, the deal had not yet been concluded.

Grant, incensed by Noseweek’s report, vehemently defended his investment, saying he had lost more than R2 million due to “unnecessary delays” caused by “people in this neighbourhood who don’t know what they’re talking about”.

“I am losing millions due to the five-month delay caused by these monkeys, including that witch (Wendy McAllister, elected deputy chairperson of the Craigpark Residents’ Association – CRA) who has nothing else to do with her time and no money to lose, like me. This is a development worth over R100m that will bring value and jobs to the area. Why would I expose myself to breaking the law?” he raged.

As part of the deal on offer, addressing the concern over traffic jams, Grant said the Bompas Road entrance to his six-storey office block would be reserved for visitors only, while the entrance at the back of the building on North Road would be for tenants only. “I’m making this concession despite the fact that the Joburg Roads Agency gave me unqualified permission to use Bompas Road as an entry point,” he said.

Grant says he had scheduled four meetings in the past with the objecting residents to explain his position and the impact of his office block, but they “kept cancelling – once, just an hour before the time”.

“This is costing me money, not them. And now, due to all the bu@%#t in Noseweek and the Saturday Star and that devil woman with nothing else to do, I have lost out on a sale deal. When 1,000 of me leave this country, unemployment will be up another 10% and you’ll all be eating rocks and grass,” he said.

Grant says he was also going to develop a “stunning field where Hugh Wyndham Park is, with the soil excavated from his development, but that the residents had rejected the proposal, saying the park was a natural wetland. “It isn’t, it’s a swamp! I would’ve made it a community field,” he charged.

(He did earlier concede that being able to dump all the excavated soil from his site so nearby would have saved him a lot of money.)

About the procedural problems that Noseweek had identified, Grant said: “I don’t make the rules. Joburg Council approved my building plans and they even felt sorry for me because of all the delays, realising how much this is costing me,” he said.

(This is the first time Noseweek has heard that pity for a developer is proper cause for  a municipality to approve plans that do not comply with building and zoning regulations, and condone building that is taking place without approved plans. The citizens of Tongaat may have some views on this after the collapse of their shopping mall.)

Noseweek pointed out that although construction at 1 Bompas Road began in November 2012, the first Site Development Plan (SDP) was only submitted in January 2013, followed by a second SDP in May and a third SDP in August. Only on 15 August 2013 did the city’s Land Use Management department stamp all three SDPs, even though the second and third SDPs detail more basement coverage and height than the first, and the third SDP suddenly ignores the 4m servitude intended for road widening.

Just over a week later, on 22 August, the actual building plans were submitted and  were miraculously approved on 6 September 2013.

Grant says he was granted a certificate to continue with earthworks (excavations) and lateral support groundwork while the SDPs and building plans were in the pipeline. 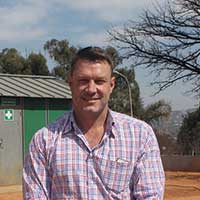 “That is common practice. There is absolutely nothing unlawful in that,” he claims.

He says nothing about the fact that building had advanced far beyond “excavations and groundwork” by the time his plans were submitted and approved.

Only on September 25 did Grant’s town planner, Rick Raven, submit a rezoning application asking for exclusions of the basement and lower basement floors from the height determination of the building, as well as an increase in coverage of the lower basement floor, from 60% to 90%. This meant giving the building an extra two levels above ground, making it six storeys high.

McAllister says that, should the new deal he has proposed to his objecting neighbours be accepted by them (110 residents signed the objection), the Craigpark Residents’ Association would “ask the council to ratify

the agreement, specifying that there will be no more height added to the building”.

“And there’ll be no more mud-slinging,” she added.