There we were, gathered at a fancy guesthouse in Barberton for a DA political do, vaguely expecting the launch of some initiative or other, but, when I learnt the reason, I thought it had to be a joke.

No joke. And who appeared as the star of the show? None other than my old friend-turned-nemesis, returned to friend, Richard Lukhele. He of larger-than-life personality, two-term mayor of Umjindi, ANC stalwart of note, was announcing his resignation as an ANC member and officially signing up to join his “new political home”, the DA.

Naturally the DA relished the moment and pulled out all the stops. Invitations had been issued to all and sundry in the local media – and to the business fraternity, of course; with a coup like that, got to take the opportunity to do a bit of fundraising. After all, Lukhele is not just some local-Joe politician or party-member wannabe. Up until the 2011 local elections, he’d been a major player in the ANC’s provincial and local political scene, treasurer of the REC (Regional Executive Committee) and was twice chosen as executive mayor for Umjindi Local Municipality (Barberton).

But, as is common within the green, gold and black fraternity, factional rifts ensured Lukhele’s eventual sidelining. Not for us to question why he was elbowed out – not now, at any rate,

The real surprise was that Lukhele should have decided to switch to the DA. That’s not something that too many high-profile ANC politicos would do – jump ship in favour of the opposition. The usual route if leaving the party is to go into private business (Malema doesn’t count) but not the DA.

This here Barberton newshound can credit Lukhele for having given me a crash course in the good, the bad and the ugly of local government – unwittingly. Noseweek readers may recall that in 2009 (nose108) this writer found himself standing in a courtroom defending a defamation suit filed by Lukhele and his former municipal manager Sibongile Mnisi.

With the legal assistance of Noseweek, I successfully defended the action. Leaving the court afterwards Lukhele and I shook hands. I said: you know, it didn’t have to come to this, because you had nothing to do with a lot of the rubbish I was exposing.

And he didn’t. I had been investigating various officials for a good two years, 2007 to 2009, and the rot was heavy: everywhere one turned there was some municipal official doing one stupid thing or another. And this little Umjindi Guardian had been bombarding the community with its findings.

It was only after Lukhele left office that I said, how the heck did you survive all that? He chuckled and said, “You guys will miss me. Local government is not child’s play (in SiSwati of course, although he is a very good political orator in the Queen’s English – something the DA supporters lapped up on October 31st). 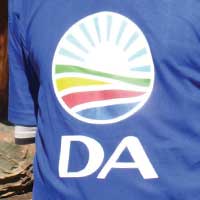 His oratory skill helped him enormously during council meetings, at which he would be so bold as to debate or question points brought up by his own ANC, usually a no-no at council meetings.

While Lukhele may have strayed  slightly with one or two misguided actions towards the end of his second term as mayor – and, needless to say, with the ill-judged defamation suit – he demonstrated the kind of political leadership and loyalty that the ANC may find themselves sorely missing.

Anyway, Lukhele’s couple of aforementioned boo-boos pale next to the bang of allegations about kickbacks and tender manipulation that have swirled around the new Mayor Lazarus Mashaba and his speaker, Vusi Mkatswa, like a bad smell ever since they took office in 2011.

It eventually dawned on me at that recent guesthouse party that there is something fundamentally wrong within the ANC, certainly a lot more than most of us realised – excepting, perhaps those comrades who are constantly jostling for position and power because they already know about the fractured state of the once-hallowed party.