When ex-Zimbabwean financial advisor Peter Ronald found his way into Noseweek in July (nose165: “Trust me, I’m a financial planner” and in nose166) he was still insisting that his Sphere Global Properties management fund was legitimate and doing well. As the company was incorporated in the Marshall Islands, it had no physical address, no annual audits and no information available about directors.

UK journalist Anna Bruning led the charge of investors who have been trying to claw back their pension fund money and cash borrowed against their home mortgages. Ronald, meanwhile, seemed to spend his time flitting between his Franschhoek wine estate, his luxury flat on the Thames in London, and his prime Atlantic Seaboard property in Cape Town.

When Noseweek asked Ronald about the bullet-proof glass at his £2.3m English manor, his chuckle echoed down the phone: Where on earth had we come upon that idea? Ha ha ha.

But all doubt about the validity of those claims vanished a few weeks ago, on 30 October, when the dodgy consultant hit the “send” button to despatch some extraordinary emails to his disgruntled UK investors.

“I am informing you all that the recent email activity [by his former employees and clients] is illegal and has one purpose, to disrupt and destroy… We cannot accept threatening phone calls or communications; and refer these individuals to the Sphere lawyers. The people conducting this activity feel that they are exempt from prosecution and free to continue… I personally have been harassed and threatened for a number of years by Julie Cameron [his long-time PA, until she was fired for querying his irregular transactions], by [investors] Anthony and Sharon Deadman, their group, along with my wife Sarah Ronald and her family…

“My wife, Mr Deadman and his lawyers have used similar tactics with the divorce courts and I have had to place a high court petition to receive financial protection against their illegal actions.

“… I and the trustees have had to defend Sphere in the divorce courts as my wife has tried to claim assets that belong to Sphere… We have proof  of the harassment and death threats against me, and extended to include members of my family and business colleagues. I can confirm that  private investigators, lawyers and the international police [are] involved now.”

Further on, Ronald brings up the sinister-sounding Mr Deadman once again: “Mr Deadman invited me to his home under false reason and pretence and with the assistance of his brother-in-law tried to force me by physical force and threat of my life to transfer Sphere member funds illegally to his bank account and to place Sphere and its assets in the hands of his brother-in-law and his wife.

“Deadman… tried to extort the full value of his Sphere investments from me, personally, to a total of £1.1m… Last week he arranged for his company sales agent Yolande Rossouw [to] get me to call her and then he took over the phone and stated he was going to get his guys to get me and would watch whilst they cut me into little pieces.”

Mr Deadman is clearly not to be trifled with.

In another email, sent the following day, he included Noseweek in his perorations. “Investigations are under way with regard to [investors] James Delingpole and Anna Bruning regarding their actions with Sphere data, as well as the losses associated with the articles that they [instigated in] Noseweek and other journals.

“I have the best support team… and I’m no longer in fear of my life and if something happens to me (hurt or kill) it is not going to help them anymore.”

The writer is clearly no longer in the comfort zone he enjoyed in February, when he wrote to anxious investors: “I hope this email finds you well and that you have had a great start to 2013. 2013 has started very well for Sphere, with real opportunities starting to become viable for trading again! As a result of this I have been extremely busy with acquisitions and disposals and maximising on the completions of stock. Your patience and understanding, as well as all the hard work from Sphere Management and our Strategic Partners over the last 3.5 tough years has allowed us to get through the worst and we are wiser and stronger as a result. As a result… I can assist in restoring value and produce growth again.”

What happened in the intervening eight months to turn him from a cool controlling operator, into a near-gibbering train-smash? 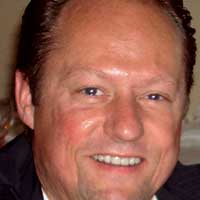 On 17 October his South Africa company, Proximitas 106, published ads in terms of the Insolvency Act, giving 30 days’ notice of its intention to transfer its Franschhoek wine estate, Blueberry Hills, to a certain Richard Atkinson [for a rumoured R18m]. But his nemesis, Deadman, got the notice and stopped the deal in its tracks, claiming he was still owed the £1.3m he’d lent Ronald to buy the farm in 2008.

Ronald’s UK business has also gone belly-up. The UK government-run insolvency service lists his creditors as being owed around £7.5 million – just over R123m. Their chances of their getting anything back seem remote.

There was a Sphere investors’ meeting – scheduled for a date after Noseweek’s deadline – which 70 creditors were expected to attend. But Ronald won’t be there. He says he can’t afford the cost of getting to London from Northern Cyprus, where he has invested in property (and where there is no extradition to Britain).

Ronald has also gone to the wall there. The faceless, nameless Sphere directors will probably be glad about that, because he allegedly “borrowed” £2.4m from that company, shortly before he invested in his Western Cape properties.