Both Perapanjakam “Punji” Naidoo’s Shan Trust and Marais Ellis’s Equus Training and Consulting CC ignored bylaws by building without approved plans, or by submitting plans retrospectively then deviating substantially from them in subsequent expansions – all without the approval of their neighbours.

Their properties are among the 89 plots in Summerstrand Extension 1 that are subject to title deed restrictions. First defined and referred to as “special conditions” when the township was formed in 1937, they dictate matters such as use of the property, the number and size of the buildings and how far they have to be set back from the road.

Moreover, the restrictions take precedence over town planning schemes and any alteration to or relief from them has to be approved by the provincial premier. In doing so, the premier has to take into account the sentiments of the neighbours. The premier also has to consider whether the amendments are beneficial to all parties involved, not just the applicant.

Title deed restrictions, “praedial servitudes”, usually add value to affected properties because they preserve the nature of an area made up of, in this case, low-density, single residential properties with sea views.

An intriguing aspect of the land-use battles is the way that various officials colluded to abrogate the rights of the landowners and ignore the rulings of the courts. The MEC’s ruling (later reversed) in the Equus Trust/Ellis case was based largely upon internal memoranda from various municipal officials. The most outspoken was the senior manager spatial planning, A D  Williams, who submitted 18 pages motivating Ellis’s case. This was then summarised by the superintendent-general for Local Government and Traditional Affairs in his memo to the MEC: “The retention of conditions… is no longer desirable as it prejudices and prevents development in the townships. Conditions of title are no longer required as town planning tools because they have been replaced by formal and structural planning schemes and policies, and the removal of the conditions will not adversely affect the character of the township.”

Williams even blathered on about global warming, climate change and “development tools to support the economic, social and environmental goals and policies of the government”, and promoting “integrated land development in rural and urban areas in support of each other.”

There were three pages devoted to “Reasons why conditions of title deed cannot be classified as servitudes”. This was despite an earlier ruling to the contrary by Judge Froneman in March 2011.

After Noseweek ran the story about the Shan and Equus trusts’ legal travails last month (nose169), Ellis sent us a very polite letter saying that while he didn’t dispute the facts as laid out in Noseweek, the complainant in the case brought against him, Wilma van Rensburg’s Hobie Trust, runs not one, but two B&Bs in the same street as his doomed guesthouse, both with buildings over the building line in contravention of the deed restrictions. He also says that both B&Bs have operated as such since at least 1999 with the permission of the municipality.

Wilma van Rensburg said her house was zoned “residential one”, with three bedrooms and a flatlet smaller than 50m2 (not a second dwelling, according to by-laws) for private use. There are garages over the front building line. All plans, as well as consent from neighbours, were obtained with approval from Nelson Mandela Bay Municipality (NMBM) prior to any building operations in 1996 and 2001.

“We had more than 15 inspections after complaints from Ellis and were told to demolish a Wendy house that was too close to the boundary wall – which we did immediately.

“We also have a five-bedroom guesthouse with written consent in 1995 zoned Business 1; approval from the premier for a garage over the front building line, no second dwelling and all construction was done after approval from premier and NMBM by 1998.”

Ellis gave Noseweek the telephone number of the lawyer who represented the municipality in the court cases, Cindy Jonker of Goldberg and De Villiers, and suggested we should ask her whether Wilma van Rensburg’s property had approved plans and whether she was being investigated by the police and the NPA – along with other property owners. But Jonker declined to comment, saying the matter was sub judice.

Ellis also sent photographs of numerous large Summerstrand guesthouses or B&Bs he claims are in conflict with title deed conditions and do not comply with the requirement to retain the area’s laid-back residential identity.

Some property owners, such as the Shamwari Hotel, when approached for comment by Noseweek, claimed to have applied for and had their title deed restrictions removed.

During the Equus judgment on 23 November 2012, Judge Revelas commented when reversing the MEC’s decision to lift the restrictions on Ellis’s property, that the MEC should at least have read the 94 objections to the application, or had somebody else peruse them before making a decision. Instead, they had simply been ignored. 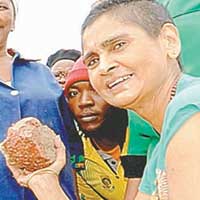 The implication is that, had due consideration been given to such objections, then the lifting of title restrictions might have had the court’s approval.

Nelson Mandela Bay Municipality has clearly granted building approval and zoned properties for business when it was not empowered to do so.

It is unlikely that any court would issue demolition orders for properties that were properly planned, authorised and rezoned with neighbours’ consent in the past, but it remains to be seen who will tidy up the mess the municipality has helped create due to ineptitude and political arrogance.

And who will end up having to foot the bill?