After a four-year battle, Laraine Lane’s honour and dignity as a sports coach has been restored – by the Gauteng High Court. Lane, a board member of Athletics South Africa (ASA), suffered hugely as a result of Leonard Chuene’s mishandling of the 2009 Caster Semenya gender-testing affair. Following Semenya’s participation at the World Champs in Berlin, the ASA’s mother body, the  South African Sports Confederation and Olympic Committee (Sascoc), instituted an urgent inquiry, the Collins Commission. On 4 November 2009, Sascoc followed Advocate Michael Collins’ recommendation and suspended the entire ASA board. Lane’s suspension came in the form of a letter from Sascoc president Gideon Sam the following day, in which he said she would face a disciplinary enquiry.

Two months later, Sam emailed Lane saying she would be contacted “shortly” about her disciplinary hearing, that would be conducted by the same advocate, Collins. This pleased Lane because Collins had told her at the inquiry that she had done nothing wrong. And a separate Deloitte investigation into the ASA’s finances found that, although there had been financial irregularities by Chuene and two others, the rest of the board (including Lane) were not implicated.

Although Chuene and his two fellow crooks were eventually dismissed, Lane and the other board members remained in limbo. This meant that she could not work in athletics (or any other sport for that matter) in any capacity. She is an athletics coach and a counsellor. Worse were the snide remarks that all the entire ASA board must have been looting the ASA.

Lane pestered the ASA and Sascoc in vain for the promised disciplinary hearing. Sascoc even refused a request for arbitration. So she took her case to the Public Protector, the Human Rights Commission, the Minister of Sport, and even tried President Jacob Zuma’s hotline. Nothing happened. So Lane eventually brought a High Court application.

Judge Gregory Wright’s judgment in the case of Laine v Sascoc and ASA on 18 September this year was short and sweet. Sascoc’s decision to suspend the board had been an administrative action by an organ of state or juristic person [created by law] and its board members were entitled to fair administrative action, he said. The rest was pretty much common sense and natural justice. Because Sascoc held “wide powers to fulfil its functions, thousands of athletes, coaches, medical staff… and others are impacted... ”

Judge Wright said he did not regard himself bound to follow an earlier judgment  by Judge Tsoka (in an application brought by Chuene), in which that judge held that Sascoc’s action (in suspending Chuene) did not amount to the exercise of a public power.

“I am not bound by his decision as I feel it is clearly wrong,” Judge Wright said in his judgment.

So Sascoc’s decision to suspend Lane from the ASA Board was reviewed and set aside. Lane was also granted an order declaring that she can participate in any sporting and athletic activities as manager, coach, selector, counsellor or other role.

When Laraine Lane was suspended from Sascoc, even her own family started looking askance at her. “I felt as if I was getting the punishment without having committed the crime. I approached a number of journalists to try and tell my story – but they were just not interested in exposing anything to do with Sascoc.

“Many were only concerned with getting their accreditation – and a trip – to the Olympics and other international events. They didn’t want to jeopardise all the favours. Journalists often have to go to international sporting events under Sascoc’s jurisdiction.”

Lane approached Noseweek “because of its amazing record of bravery in exposing corruption”.

“It was only when I went to Noseweek that I felt people were listening to me objectively. I can’t tell you what it meant to get those two articles into the magazine.

“Although I won the court case, it has cost an enormous amount, which is for our personal account. And taxpayers’ money has been squandered by Sascoc, which could have sorted this out with one email.”

Now Lane would really love to get back into coaching, which is her real passion. “But Sascoc has applied for leave to appeal. I’ll have to wait for the outcome before I make any decisions.”

Lane, who grew up in Port Elizabeth and moved to Johannesburg in her twenties, has four adult children and five grandchildren. She grew up in a family where strong values were everything. “We were highly aware there were many disadvantaged people in the world and that it was important to get involved and try to rectify society’s imbalances. That was the way to get the most meaning out of life ….”

Both her mother and aunt were arrested for their views. “My grandfather, Dr Adolph Schauder, cleared the slums of Korsten and facilitated the building of more than 30,000 houses for disadvantaged communities in Port Elizabeth. He developed the concept of the site-and-service scheme.”

Lane got into coaching “by accident”. She’d studied art and sculpture and sang for the SABC. She only got involved in athletics when she started running with her children, who joined the Wanderers Club in 1975. Within  no time she was running marathons and swam the Midmar Mile nine times. “All average performances,” she says.

Highly aware that Wanderers was open only to white athletes, she noticed one evening, not long after the June 16 uprising, a group of teenagers watching the youngsters training.

“Later I was approached by two adolescents, Elliot Faku and Cad Caiphus Vilikazi, for a lift to Alexandra Township. Helping them with transport became a regular occurrence.”

When she next visited Wanderers, she asked the coaches if the two youths could join their groups. “They laughed in disbelief, before refusing. One suggested I train them myself.”

And so began a voluntary middle-distance coaching career at the Wanderers that lasted until 1985.

“I learned to coach from the books I purchased …”

The early years of promoting racial integration in athletics were fraught with difficulty and danger, says Lane.

“Few remember the draconian Pass Laws. When athletes failed to arrive for evening training sessions, I’d discover that they’d been arrested for not having a pass. This resulted in frequent trips to police stations.”

A fellow coach referred to the athletes she trained as “Mrs Lane’s k...s”

She moved to a voluntary coaching position at the University of Witwatersrand, where she trained both university and township athletes until 1992, before being appointed a Nocsa (Sascoc) selector for the Barcelona Olympic Games in 1992, and, subsequently taking up her position with the ASA. 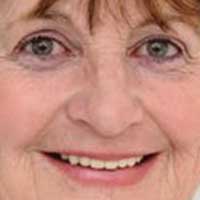 “I love athletics and my country, but being patriotic does not embody condoning abuse,” she says.

On the same day that Lane won her court case, she heard that her grandson, Ben Tainton, had been promoted to the top ten in Idols.

“We drove straight from the court case to the Moreleta Park auditorium to support him.

“I didn’t believe I could have such luck. I thought either Ben would get into the top ten or I’d lose my case. It’s been the best week in my life. We are so proud of him!”