On 10 September, the Construction Industry Development Board (CIDB) assured Parliament’s Portfolio Committee on Public Works that it was “in the process” of appointing an investigative team “to kick-start” its probe into the 15 construction companies that had admitted three months earlier, in June, to having engaged in collusive tendering on government contracts worth tens of billions of rands.

Most of these companies are still registered on the CIDB register of contractors, which grades and categorises its members on their ability to carry out construction projects – a prerequisite for qualifying for any major government contract.

In its September report to Parliament, the CIDB stressed that its code of conduct prohibited contractors from engaging in collusive practices. “Collusion, by its nature, is exclusionary and therefore undermines the development and transformation of the construction industry,” the CIDB’s acting CEO Hlengiwe Khumalo piously intoned.

All good and worthy… but hadn’t Mr Nose heard all of that said a fair long while ago? Yes, on 25 June, two-and-a-half months earlier, the CIDB had issued a press statement in which it announced that it was setting up its own inquiry into the conduct of the bid-rigging construction firms.

Engineering News reported on the same day: “The industry regulator said it was currently [sic] in the process of constituting an investigation team and a presiding officer for the inquiry, and had not yet decided on the nature of sanctions to be imposed, as this would pre-empt the outcome of the formal inquiry.”

It is clear to Mr Nose that what the CIDB needs is a good kick in the rear end, in order to “kick-start” its inquiry. But then again, it occurs to Mr Nose that there is no better place for the conspirators in the construction industry to continue their conspiring than in the CIDB, where they are – and have always been – the dominant members. As was so well explained in nose167 (“Big boys forever!”): the CIDB was created ostensibly to ensure that an unregulated industry with a fair number of cowboys in it was firmly regulated – in the public interest, naturally. But, in effect, its main function was to secure the uncontested dominance of the established industry giants. 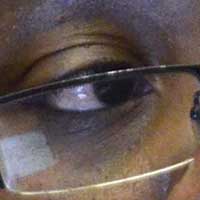 What, dear reader you might do, is make sure you are registered as a voter so you can vote in the coming elections. And, in the meantime, boycott the e-tolls: Tolcon is a subsidiary of Murray & Roberts. That way, they may eventually get the message: You screw us, we screw you.