Sunday best. PJs of many colours

Well it goes without saying, when you’re loading your backpack for the Berg you don’t take the least little unnecessary thing. I remember from Air Force days: 10,000 feet (always feet in flying, hey?) that’s oxygen altitude in unpressurised aircraft (always unpressurised because of bullet holes, hey?) Now up top of the escarpment at ten-thou without the O2 your athletic legs get wobblier and wobblier with each gram of extra mass to schlep around.

For food it was soup powder, milk powder, powdered sweeteners for tea, powdered parmesan cheese, spaghetti and mielie-meal for carbohydrate energy and so on. Light, man. And for clothing: 1 pr extra socks, 1 jersey, 1 raincoat with hood, 1 hat. Shirt, and broeks long and short. That’s it. Minimal.

But up the Berg I have to wear pyjamas. My boy Joe says it’s psychological, I’m neurotic because my mother would never allow me to sleep in my school shirt, and that’s why I would never allow him to sleep in his. But I know it’s physiological, I get itchy all over if I try to sleep in stink-old clobber from a day’s climbing and all those sodium salts in my day’s sweat starting to crystallise against my skin just as I’m dropping off. So I’m off to Mahomedy’s down Berea Road for something suitable, and there I espy exactly what I seek, winter pyjamas on one of those plastic male dummies, a Caucasian one sprayed brown as an act of defiance against apartheid. This outfit is of thick brushed cotton, but alas, of most vulgar pattern, vertical deep pink stripes against a creamy background, with genteel floral motifs. But whatthehell, where I’m going nobody’s going to see me in this attire except my son, and he thinks I’m dippy anyway.

And we’re off! It’s the Ship’s Prow Pass for us, as ugly a piece of geomorphology as you could hope never to see in a nightmare. As for the name, only a colonial Brit could think of something so inept as a sea-going vessel in the sky. A horrible chute of loose rock dynamited by the colonial government of Natal back in the 19th Century to stop cattle thieves nicking livestock from the Natal Midlands and rustling them off to Basutoland. That menacing thing sticking up in the middle of the ravine is no ship, it is the great basalt clitoris in the fanny of Mother Nature, a merciless old bitch by anybody’s measure. A steep 3-to-4km downhill gutter full of ill-balanced igneous chunks, some as big as your thumb, others the size of trucks.

Coming down last year, at the bottom of this lot we had come across the debris of a party of three students from Stellenbosch, not their bodies, those were never found, but their sleeping bags ripped and ragged amongst loose rocks and their clothing hooked in shreds amongst the branches of the stunted trees along the edges of the ravine. They’d been caught in a flash flood of jumbled water and rock and stoned to death, Drakensberg style.

From our wee tent that last ghastly night we’d seen a rescue squad making their way up a track hacked from the basalt along one side of the chute, in search of people lost up top somewhere, they’d shouted down to us, and that’s going to be our route now. Hard. But that’s what we came for.

And here we are up top! Here’s our dinky little tarn of the purest H2O, rainwater, and here we pitch our wee tent and tuck into the dehydrates and by nightfall we’ve settled our bones we’re fast an innocent sleep. The dawn is crisp and clear and bloody lovely at ten thou. I make coffee and strut about in my fancy pyjamas, and suddenly appears a goatherd and goats nibbling at almost nothing edible but stunted straw. Gently smiling, he admires my Sunday suit. All these subtleties in body language, 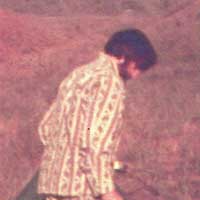 Fanagalo and bits of English and Zulu. Indeed he wishes he had such a suit. Oh go on, says young Joe, give him your bloody pyjamas, you can sleep in your stink shirt for one night and tomorrow we’ll be home.

So I fold up my jammies proper dainty and hand them to him with a smile. This renders him speechless but he signals us to wait and eftsoons reappears with a lump of goatmeat in a canvas bag. For us. With some sticks of wood from somewhere, there are no trees at this altitude. We sort of blast this goatmeat with flame from the sticks plus any old flammable stuff at ground level and I tell you it’s snobbery that disallows us to eat goat in fancy restaurants. Tastes something like whisky, this lot, from the smoke, and really yummy. Better’n venison any day.

Cowboy takes cattlemen for a ride
Gavin Foster investigates how KwaZulu-Natal dairy farmers are left sucking the hind tit in cow-leasing ...
Dear Editor
Tied up in knots ♦ Thuli for president! ♦ Defence against banks ♦ Alli all ...
Dear Reader: Moonshine
Noseweek has always believed in sunshine journalism. We expose sin in dark corners and alleyways ...
Stent
Spin Doctor ...
Slow train coming
Noseweek reader Rory Nottingham smelt a rat last month when he tried to make a ...
Free-for-all at SABC
Key news personnel use their positions to boost private business. SABC staffers were recently asked to ...
Dune deal
Court orders Rhodes tax professor to demolish multi-million rand seaside villa. In 2004 Noseweek reported that ...
The unkindest cut
Neurologist Dr Percy Miller recently positioned himself as a hero during a skirmish in ...
Paris is a sweetheart
While Swedish electronics giant Ericsson runs for cover, Dlamini pulls the tender strings in Pietermaritzburg. Why ...
The grapes of wrath
Farmers clash with would-be developers over bid to change Durbanville zoning. ‘It is in the personal ...
Lambo limbo
When, in late August last year, Cape Town building contractor Judd Smith decided to ...
Neighbourhood news
This report comes from UK-based Africa Confidential (www.africa-confidential.com), the authoritative fortnightly bulletin on Africa. ...
Sail ho! Pirates on horizon
NOTE: the following document was found, covered in Bovril stains, at the bottom of ...
Absa tries slithering out of it
Absa has made a squalid attempt to save face in the wake of Noseweek’s story ...
Books: Baywatch. Evil under the sun
Water Music by Margie Orford (Jonathan Ball) ...
Rebranding Mpumalanga. Analyse the stench
Watching television news and reading the Sunday newspapers has become a distressing pastime of ...
Sunday best. PJs of many colours
Well it goes without saying, when you’re loading your backpack for the Berg you ...
Classified ads #168 October 2013
FOREIGN HOLIDAY ACCOMMODATION ♦ LOCAL HOLIDAY ACCOMMODATION ♦ property  SERVICES ♦ FOR SALE ♦ WANTED ♦ SERVICES ♦ ...