Tobroek, nou, hy was my boep-china. Also he was the ou who wrote Article D of the Freedom Charter. That wasn’t why they put him in boep, of course, that was for taking up arms against a sea of troubles: the Spear of the Nation, uMkhonto we Sizwe. The reason I mention the Freedom Charter is that it took brains to work out such a beauteous piece of Marxist prose, and such brains ou Tobroek had all right. Me too. We had brains we hadn’t even used yet.

I think Article D said The Land Shall Belong to All Who Work It, something noble like that, but Huletts and Anglo American said they were working it just fine according to this and that system of their own here in Natal, so things got a bit complex, know what I mean? I mention all this only to establish the rational status of ou Tobroek’s mind. You can’t get more rational than being a surveyor. I mean, come on, you’re defining the very arrangement of the surface of our planet.

Well irregardless of intellek they stick ou Tobroek and me in the Pretoria prison madhouse for 11 months. In fak it is the Observation Section where, to heal you of your antisocial nature, they shut you up silent and solitary for six weeks with a bible and a shitpot and a felt mat to kip on, two boep blankets and a small table with a basin of water, so you can think about Jesus in a cell with no windows until you’re ready for psychoanalysis by a tronkboer name of Van den Beestekraal with a degree in Theology, Criminology, Philosophy and Goeters from the University of Potchefstroom. Also Psychology II.

But after 11 months news leaks out and Helen Suzman raises Hell in public as is her wont and this irritates Lieutenant Beestekraal and he calls ou Tobroek and me to his office and psychoanalyses us and tells us what we need is hard labour. But Tobroek and me, our muscles hang limp on our bones from lack of exercise, and perchance with some luck this hard labour just might take place in the sun. Which, sowaar as God, it does.

We are given big brown felt hats and taken to a vast earthworks by a skinny tronkboer with sinister shades and an R4 assault rifle. The earthworks are an athletics track. Our Pretoria beamptes hierso are so good they hold two national track records, says Shades. This track is for them. We hear a distant clanking and round the corner of the boep appears the hard labour span of 80-or-so bandiete with wheelbarrows called kedilleks and shovels and big brown felt hats. 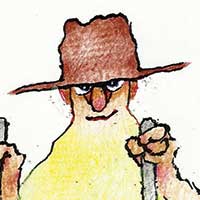 can’t use the shovels because we are convicted of crimes of violence, hey. We line up with our kedilleks opposite the ouens with shovels and each gives us about a soup-plateful of mud and creeping like snails we take these to the top of the embankment and tip them up and stand gazing at the distant Magaliesberg. If you’re moving you’re working, that’s the ideology round here, see? When the whole span is up there gazing at the mountains the beamptes go bloody bananas and break switches from the trees over there, kweperlaaitjies, and roll balls of mud on to the tips and hurl them at us with deadly accuracy. We take shelter behind our kedilleks. A certain boer stomps over to the corrugated-iron bog and kicks it all over with his great big boots until a piteous figure emerges who’s been in there 45 minutes. He wasn’t moving, no part of him, not even his bowels, so he wasn’t working. He’s charged with malingering: three meals. We stumble back to the span with the shovels for another soup-plateful. So gaan dit mos, it’s lovely in the highveld winter sunshine.

After a week-or-so ou Tobroek suddenly says to me, one day Hey Jock, look at that. Down below stands a great big flabby 6-foot 5-inch tronkboer with a theodolite and a booklet of some sort, looking puzzled. Come, says Tobroek, I’ll get us a nice little job here! We march up to 6’5’’ and Tobroek announces: Meneer, ek is ’n landmeter! Troonkboer says Jy lyk vir my soos ’n vokken bandiet, and ou Tobroek seriously wants to hit him but grinds his teeth and falls sullen.

We creep on with our kedilleks until he nudges me over to where stands a striped wooden peg. Tell me when nobody’s looking, says he. Okay, now! say I, and he zaps this peg up and plants it two or three paces to the left. We creep on. At the next peg he says Right, anybody looking? No! say I, and he zaps this one four or five paces along. Teehee, he giggles, that’ll fix their national records. Tobroek and me, we have smirks we haven’t even smirked yet.