Small print. The Gospel is in the detail

I have enough beautiful offerings in Emjindini Kasi, Barberton Township, where I can step in and be “drenched with the blood of Jesus”. I don’t need any more. What am I on about? Let me tell you.

Jesus Christ Superstar and The Last Temptation of Christ are just two movies that could have been chosen by the Intercape bus service to entertain me and my fellow passengers on my recent jaunt to the Fairest Cape to attend Noseweek’s 20th anniversary party, and I would not have been offended. I may have thought it an unusual choice of travel entertainment, but fair enough, tastes differ.

I had really been looking forward to the trip. I had decided to go by bus to get some much-needed rest on the long trip and enjoy one of my favourite travelling pursuits – viewing the landscape and taking in the sights.

Holy Moses! Little could I have guessed my journey would be turned into two days of “Jesus-loves-you” hell. I know that sounds like a theological contradiction in terms, but believe you me, it’s possible.

Before I describe Intercape’s force-feeding of the love of Jesus; his power to save, heal and all that, let’s revisit the two movies I mentioned.

If you are going to try to brainwash someone into some belief, for God’s sake, try some subtlety. Governments have done it for as long as there have been governments; they call it propaganda. By playing Jesus Christ Superstar, Intercape would have been entertaining me with a musical I have seen and enjoyed many times. And I would have enjoyed it once again and would not, for one second, have thought I was deliberately being bombarded with the blood of Jesus.

They might even have opted for The Last  Temptation of Christ, which would have exposed Inter-Captured bus passengers to a thought-provoking, controversial film about Jesus and his relationship with  Mary Magdalene. And yes, I would have been drawn in by the theme – as I was the first time I saw it, not realising, again, that I was being brutally crucified into the Jesus-freak crowd.

But we were offered nothing so courteous or subtle. What bothered me most was that there was no indication or warning about Inter’s “religious affiliation”. If anything, that is what this heathen’s hullabaloo is all about.

Nothing was said when I booked the tickets by phone ; I saw no sign at their Nelspruit depot, no sign at their Jozi’s Park Station depot and likewise nothing at the Cape Town Station coach terminus.

What the missing signs should have pointed out is something like: “you will have to endure 18-or-so hours of hallelujah-Jesus-themed videos and, as a bonus, the intermissions will be filled with videos of the Sunday pastor farmer with the cowboy hat.”

Actually I found the farmer-cowboy- pastor quite entertaining – even inspirational – really, truly. I caught his broadcasts several times while surfing channels in the early hours of Sunday.

He brings across his “Jesus loves you” message in a subtle manner. He focuses more on the story and less on the constant plugging of Jesus this, Jesus that. But still, I don’t need him on my bus ride – over and over again. Besides, as I pointed out at the opening of this tale, I have enough beautiful offerings in Emjindini Kasi, wherein I can step in and be “drenched with the blood of Jesus”.

Back to the matter of a warning sign. I simply could not believe that would-be passengers are given no warning about the nature and content of the on-road entertainment offered by Intercape.

Surely, I kept telling myself, it would be highly irresponsible of this bus line not to inform potential customers of this matter in advance? After all, we are talking about religion here, a very sensitive issue.

After scratching my head to the point of giving myself a bald spot, for some reason – I think it was journalist’s intuition – I took another look inside the folder/envelope in which the ticket came. Opening and reading it with a great deal of difficulty, I exclaimed, Jesus Christ (I really did) – there it is!

At the very end of what looks like a 2,000-word-plus plethora of Intercape information about “exclusion of liability” and all the other little tidbits that companies write up to cover their asses, there it was. The Jesus bombar 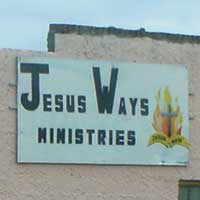 dment was described thus, under the heading “Entertainment”: “We have introduced family friendly material promoting the Gospel on all routes”.

Now, is there a problem with this? No, not just one, many. But to spell them out would require a lot more space than the stingy editor allows me, so I will return to the crucial one: the information is printed in such a small font size you can barely decipher it, even with reading glasses; I know, I use them.

Furthermore, it is hidden, along with the other barrage of disclaimer information inside the ticket jacket cover, where it is unlikely to be noticed by anyone.

This, to say the very least, is highly irresponsible of Intercape.

Thank the Lord, there are alternatives: I returned on Greyhound.