Racketeering charges against Cato Manor Organised Crime Unit policemen, as well as Provincial Hawks commander Major General Johan Booysen (noses149, 150, 154 & 165), are based almost entirely on hearsay evidence, or on a statement allegedly given by a a taxi boss with a long criminal record – and shortly after he had been left mentally impaired after suffering two strokes. 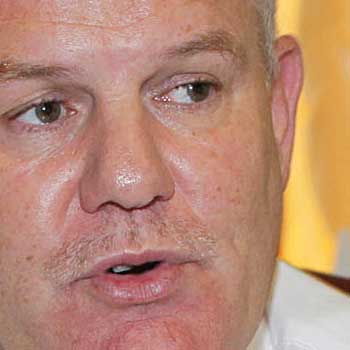 Booysen is challenging National Prosecuting Authority acting head Nomgcobo Jiba's decision to bring racketeering charges against him and his men, claiming the decision to do so was unjustified and unconstitutional. Booysen wants a court to review Jiba's decision. Jiba has denied Booysen's allegations and says she relied on police dockets as well as evidence given under oath to bring charges.

The trial of Booysen and various members of the Cato Manor violent crimes unit is scheduled to commence in November, but it is unlikely to proceed until Booysen’s application to have the racketeering charges dismissed has been heard in court.

The official investigation that has led to the disbandment of the SAP violent crimes unit and the prosecution of most of its members, was led by Major General Jan Ntebo Mabula of the Hawks, assisted by the Independent Police Investigative Directorate (IPID).

But it now emerges that the IPID members have evidently since fallen out with Mabula, as they are now assisting Booysen and his men with their defence.

Shortly before Noseweek went to print City Press recorded that Mabula, who led the investigation that led to the arrest of Booysen and his men, was himself under investigation for the death, by suffocation, of Solomon Nengwane (53). The newspaper reported: "The Independent Police Investigative Directorate has opened a new investigation into Nengwane’s death, allegedly at the hands of a task team of detectives under the command of Mabula, then a colonel, and its subsequent cover up….. Four of the suspects in the case were killed shortly after the  heist. At the time, prosecutor Peter Smith told the court it seemed police were “knocking off” witnesses to “cover their own tracks”.

The police dockets that relate to the allegations made against the Cato Manor policemen only mention Booysen twice. In both cases the witnesses simply say he arrived at the scene of major shootouts some time after the shootouts happened, so it is regarded as highly unlikely that these could have persuaded the prosecutions boss to bring charges of racketeering against Booysen. The other prosecution statements made available to the defence are one unsigned document attributed to a former police reservist who has since emigrated, two statements from a policeman that Booysen had sacked for corrupt conduct, and a statement from Bheki Mthiyane - the notorious taxi boss refered to above, whose widow in an affidavit of her own denies that such a statement was or even could have been taken from her husband.

Mthiyane's colleagues in the taxi industry have also told Noseweek that they did not believe Mthiyane could have given the police a credible statement of any kind - as he was severely mentally impaired after suffering two strokes.

The Mthiyane statement is commissioned by Hawks Lieutenant Colonel Richard Ramukosi, who is a former "kits konstabel" - one of the virtually untrained auxiliary cops used in the apartheid era to guard police stations and other installations.

At the time he allegedly made the statement, Mthiyane had been expelled from the Stanger Taxi Association and his taxis were suspended from operation. He was also out on bail for a string of crimes committed around Durban, amongst them attempted murder (KwaDukuza case 410/07/2012), theft of a motor car (Hluhluwe case 74/08/2012) murder (Mandeni case 28/09/201) and various cases of assault, intimidation and attempted murder in Kwa Dukuza.

As an informer using the name Ndlondolo, Mthiyane had provided information on the whereabouts of other criminals to the Cato Manor unit - but his cover had been blown and various taxi hit men were seeking to kill him. In affidavits and memo's seen by Noseweek the Deputy Commander of the Hawks in Durban, Colonel AK Hoosen asked IPID to take action to protect Mthiyane after he complained of repeatedly being contacted by people claiming to be from IPID who knew he was acting as an informer for Paul Mostert of the Cato Manor unit. Nothing was done about the complaint - although the Hawks team that was probing Cato Manor then moved in on the conveniently terrified Mthiyane.

In an affidavit, Mthiyane’s wife claims that Brigadier Zodwa Mokoena (who is reputedly Jan Mabula's girlfriend) of the Hawks team had promised Mthiyane medical attention for his severe heart complaints as well as protection from other taxi associations who were after him. The affidavit also alleges that Mokoena promised that she would organise that Mthiyane's taxis be allowed to operate again - if he implicated Cato Manor cops in criminal activities.

Mokoena did not answer emailed questions relating to her alleged promises. Unsuccessful attempts were made to contact her telephonically.

The statement attributed to Mthiyane includes the following account: "The first member of the Maphumulo Taxi Association to be assacinated  was Lindelani Buthelezi, Lindelani Buthelezi was killed by Cator Manor unit as one of the trustees [who] was there when the money was arranged to pay Cato Manor for well job done. It was a lot of money… I cannot recall how much it was." (sic)

"Always when Sanele and Bongisizwe left with money they would tell us that the money was going to be given to the Boss referring to Mr Booysens and they would say, we have connection and we pay Booysen as head."

Desmond Moloi, a lawyer representing the two men who allegedly handed over money to Cato Manor cops slammed the Hawks for relying on the statement of Bheki Mthiyane.

In a letter sent to Hawks boss Anwar Dramat, Moloi describes Mthiyane as having been “not only a known story peddler and a criminal but was also the sworn enemy of both my clients." He continued "the allegations contained therein could be objectively proved by any serious investigator of crime to be nothing but patent falsehoods. All the allegations made in this statement can never stand the scrutiny of a court of law. Ndlondolo (Mthiyane's assumed name) is now deceased and can never take the stand and be discredited [...] To release this extremely defamatory statement into the public domain will cause our clients extreme prejudice.  [...]Our clients instruct us that he was extremely sick around July 2012 and they share the view that his mental faculties were impaired due to his illness. Our instructions are to record our clients' displeasure at the conduct of the prosecuting authority and to reserve all our rights against all the role players."

Other statements that acting National Director of Public Prosecutions Nomgcobo Jiba claims she relied on when making a decision to prosecute Booysen and his men on charges of racketeering are:
♦ an unsigned and undated statement by a former police reservist, Ari Danikas. Danikas, a former police reservist was once friends with Booysen - but fell out with the Major General when he refused to promote Danikas. The unsigned statement attributed to him covers events that are not included in the list of charges against the Cato Manor cops - and Booysen's legal team argues this makes it irrelevant.
♦ two statements by Colonel Rajen Aiyer - a policeman that Booysen fired on finding he was involved in corrupt activities.  (Both of Aiyer's statements were only signed after Jiba had already authorized racketeering charges being brought, so could in any event not have influenced her decision.)

Earlier this year The Sunday Tribune reported that Aiyer had once claimed in court that he had taken a witness statement from an African Grey Parrot. Noseweek long ago reported that Aiyer had been caught using police vehicles to transport meat from up country for delivery to butcheries in Durban. He had temporary command of the Cato Manor unit at the time, and pleaded guilty to the charges at a disciplinary hearing.  Aiyer was allowed to remain in the police - in an administrative post in another unit but shortly thereafter had his police issue pistol confiscated by Colonel AK Hoosen of the Hawks - after he threatened to murder members of his own family in a dispute over an inheritance.

A senior source in the Gauteng Independent Police Investigative Directorate told Noseweek "there was no evidence [...] But the Hawks team under Mabula were under pressure…  [they] deliberately ignored any evidence that pointed to the innocence of Cato Manor cops. The Mthiyane statement is only one example. False claims have also been made in court papers and in the media about the shootings by Cato Manor not having been investigated. There were inquest court hearings into many of the Cato Manor cases that the media and the NPA have chosen to ignore."

Internal correspondence between the State Attorney and IPID is included in Booysen's court papers which reveals that at the time that Booysen and company were charged with racketeering IPID were still interviewing Aiyer and finalising his evidence - confirming that Jiba could not have relied on this evidence to bring charges against Booysen as it did not exist at the time.

Carl van der Merwe, Booysen's attorney tells Noseweek: “Seeing that there are so many disputes of fact, there will have to be oral evidence led in court. We will have to get into the boxing ring."