Rooi Hel. The devil is in the detail

No man in the street nor even woman in Port Elizabeth knew why the local prison was called the Red Hell. I mean it’s just a big rectangular sort of lump of gebou with lots of poky windows and steel bars all over and the colour of ordinary old bricks, the least exciting of colours. But the Prisons Service had never felt it was their job to be exciting certainly not to be Hellishly exciting. 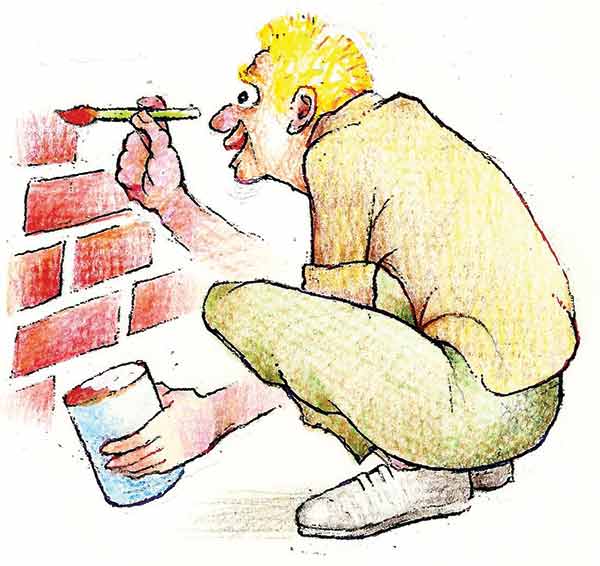 Upon entering die Rooi Hel, however, one noticed that the staff never took off their caps but pulled the peaks well down over the eyebrows, whilst the bandiete there always looked only at their boots, even when wishing one a good morning. This in spite of the fact that a certain Superintendentgevangenisbeampte who had better remain nameless decreed it imperative that a convict should not creep around all the time searching for shreds of tobacco on the floor but look one straight in the eye and smile respectfully.

Yet it was this self-same Superintendent who on going through the books one day had realised that it was now 1965 and his prison was available for a coat of paint, he was the one to choose the colours, and since he had plenty of free labour he could make it as complex and beautiful as he chose. The inside of his gevangenis was of simple austere facebrick, see, with neatly done courses of mortar, and now he chose 200 buckets of much better brilliant Indian Red acrylic and appointed a squad of 20 artistic bandiete to paint every brick with a small brush. Not the mortar between bricks, just the face. Throughout the entire boep. But upon standing back when the job was done he found it all a bit monotonous and got the painting span to go over all the mortar with an even smaller brush and white paint. Well, what can I say? To behold it was madness. This is the reticulate camouflage system of the giraffe, man! The lion is unable to settle its eyes on any part of the body and by the time it’s got its mind together and is ready to sink its canines into some part of its prey, the giraffe is half a kay away and still galloping.

In boep, galloping in any direction is seriously discouraged, we byt vas and go about with hung heads as if in mourning, and now and then we do indeed find something to smoke; snout, tobacco. But the Big One is when some crafty dealer has smuggled in some boom and they’re smoking it up in a secret corner; then a great sigh goes up throughout the boep and every bandiet rushes to window or ventilator for a second-hand lungfull of the delicious dagga fumes wafting all about.

And that’s how ou Elston comes to be positioned on a stool at the passage window of our cell. A warder happens to be standing there. In boep language you get two sorts of boer: ’n plaasboer and ’n tronkboer. A farm-farmer and a prison-farmer, and this one snarls at Elston, Hoekom hou jy my dop? Elston replies: Waar moet ek nou kyk? The boer gets enraged. Klim af of ek kla jou aan! he hisses. Elston gets down. But a minute or two later he’s back and sniffing. Now there’s a cleaner bandiet in the passage with his broom and Elston says to him, Waar’s die boer? Cleaner looks obviously at somebody to one side who signals him some sort of message. Hoekom vra jy? cleaner asks. Ek wil hom naai, says Elston.

Yirra yissis the boer goes berserk,’ksê! He furiously unlocks the metal outer,  cell door, slams it open and he’s just about to open the steel grille when he sees ou Elston coming for him across the cell. It’s a big cell with 12 of us in it, nasty bastards, long-term convicts waiting mindlessly for transfer to Pretoria Central. Elston is pushing the Indeterminate for GBH. He is a breker, a street-fighter. His weapon of choice is a length of heavy motorcycle chain on a stub wooden handle. Elston’s face is a mess of badly-mended bone and scar tissue. His hands are as the underside of a rhino’s foot. He is merciless and impervious to pain. 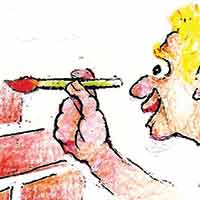 The boer quickly re-locks the grille, just in time. But Elston might reach through the bars to grab his lapels and smash his face forwards against the bars. He makes off at the double and comes back with two really heavy ouens with handcuffs, leg-irons and truncheons at the ready. Elston smiles sweetly and steps forth. He smiles sweetly at the Super in his office. It’s lashes for you orraait, says Super, you know that’s what you get for swearing at a beampte. He’s passed sentence before hearing any evidence. I didn’t, says Elston, I told the section cleaner I wanted to make love to the beampte. Super scans Prison Regulations in his soukol maaind. Nothing. Is jy dan ’n moffie? says he. Are you a sodomite? So af en toe, seg ou Elston, also I steek small donkeys and big dogs and chickens. Jou vieslike skurk! says the Super, you disgusting scoundrel, and further scans. There’s nothing in Regulations about bestiality of course and nothing about prisoners being in love with staff.

You know you not allowed to look out the windows, says he. Three meals, starting tomorrow. Elston smiles sweetly.