How cunning of the publishers to bring out

hardback and e-book versions of No One Left to Lie To when the soothsayers are murmuring that Hillary Clinton has designs on the White House. Christopher Hitchens’s furious denunciation of the House of Clinton and all its works, first published in 1999, might just give Democratic voters cause for pause.

Razor-tongued Hitchens, now no longer with us, did a gory hatchet job on President William Jefferson Clinton, erstwhile darling of the American left – but he was equally unsparing of Hillary. The book, with an admiring foreword by Douglas Brinkley, spares neither of the Clintons. 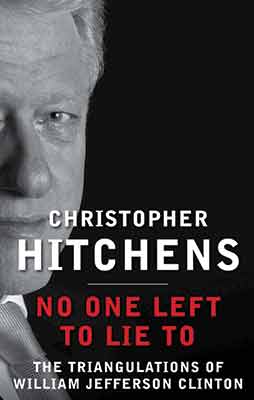 Not since the formidable commentator H L Mencken fulminated in the 1920s and ’30s against the sinful politicos of his day has so much articulate rage been directed at the American political system and those who so cynically exploit it.

Veteran journalist Hitchens went into battle fully armed. He knew his stuff, and carried out determined research for years. The book is initially densely populated with names unfamiliar to foreign readers, but you get the picture. It appears that the Clintons wielded malign power from the centre of a web of dodgy connections.

Brinkley comments that Hitchens had wanted to be sympathetic to Bill Clinton, but his sense of ethics made that impossible. He refused to be a liberal muted by the “moral and political blackmail of the Clintons’ eight years of reptilian rule”.

And he is persuasive. If his vivid vocabulary occasionally seems over the top, he soon proceeds to prove the relative merits of this prosecution. The invective is particularly scathing in the chapter headed “A question of Character”. In the midst of the Monica Lewinsky scandal, it became clear that Clinton toadies worked frantically to persuade the populace that they should concern themselves with “issues” rather than display improper interest in “personalities”.

This dodge proved increasingly unconvincing as abused and discarded women started popping out of the woodwork to tell their tales of unhappy encounters with Bill Clinton. By and large, he seemed to have an eye for respectable women, whom he forced to succumb. At least two of them accused him of biting. Their respectability worked in the assailant’s favour, as they wished to avoid unpleasant publicity.

Hitchens detected a recognition of the “character issue” at the outset. He says “not one of Clinton’s team in 1992 did not harbour the fear that a ‘flaw’ might embarrass and even humiliate everybody”. There were suspicions that there might be funny money problems, “bimbo eruptions”, or a sordid combination of the two.

Hillary Clinton’s book It Takes a Village records a relevant conversation with the Clinton daughter Chelsea. Her mother tells the six-year-old that other people will try to convince voters to vote for them instead of for Daddy by saying terrible things about him. “Chelsea’s eyes went wide, and she asked ‘What do you mean?’. We explained that in election campaigns people might even tell lies about her father in order to win.” Chelsea was in tears.

Hitchens contends that Clinton half-realised, when he gained the Oval Office, that he had no grand thoughts and no noble dreams. He also realised that he might have to give up one of the things which brought him release from his demons. “He lost little time in substituting the one for the other, and reacted with extreme indignation when confronted with the disclosure of the fact. This was the rage of Caliban glimpsing his visage in the glass.”

Hitchens demonstrates what he believes were deliberate attempts to divert attention from his impeachment proceedings by ordering pointless bombing raids on distant lands.

At Christmastime in 1998 demonstrators outside the White House protested the bombing of Iraq with chants of “Killing children’s what they teach – that’s the crime they should impeach”.

As the sexual assault cases mounted against Bill Clinton, one of the presidential couple’s advisers, Dick Morris, was fired. He then remarked that “Bill loves Bill and Hillary loves Bill, and so that gives them something in common”.

Hitchens comments that the cynical lying campaign against Monica Lewinsky and other women sexual victims of the president revealed Mrs Clinton’s one worthwhile achievement, in having tried to protect her daughter by forewarning. “A speck of pity here, perhaps,” Hitchens reluctantly concedes.