One thing I have learned over the years that I have been engaged in this business of exposing wrongs and wrongdoers – a pursuit better known as journalism – is that most subjects of stories, when confronted, take on a defensive stance.

Corporate entities are no different from individuals or politicians, albeit that they use public-relations-style spin to tell us how much they care about their customers and would never compromise their loyalty (read cash source). But I felt disappointed at the absence of spin in a simply worded letter I received last month – along with two belts – from the CEO of Mr Price, Stuart Bird.

Bird’s “gift” of belts and his accompanying “simple” letter was in response to my displeasure at having bought two belts from Mr Price’s Barberton store which began to disintegrate within only weeks of wear and turned out to be made of “Pu/mock Suede” – I still don’t know what that is.

Anyway, Bird acknowledged reading the article and said “I… wanted to let you know that we do stock leather belts. However, I am not sure of your size, so I have chosen two which I hope you will enjoy wearing. Please accept these with our compliments”.

Short and sweet, no public relations spin, nada. But, while I appreciate that Bird read the article – an indication that my complaint had reached the right ears – I would rather he had told me Mr Price would exercise greater quality control when making purchases from our Oriental Brics partners. Even if it had been just spin, it would have made me feel as though the whole exercise had achieved something.

Yes, I certainly appreciate the gesture of the two leather belts – genuine leather – and I am enjoying wearing them. Not to worry about the size, with a size 32 waist, I’ve become accustomed to trimming belts I purchase to fit.

And enhancing my appreciation of these fine leather gifts – replacement, rather – is the fact that they are made right here in the RSA (Mr Bird’s patriotism is duly noted) by a company named Trail, as indicated on the belt in big white letters – unlike the Pu/mockSuede label that was in such small print it reminded me of a print-media correction or apology. (Of course, I do not do that in my little Guardian!)

Be that as it may, this was not about Bheki Mashile and his belts. It’s about the hundreds and thousands of consumers who would end up with the same shoddy products but have no recourse and would be left out of pocket – highly unlikely that they would have saved the receipt. And as we all know: no receipt, no refund or exchange.

South Africa’s Consumer Protection Act states that a consumer may return a product to the shop within six months. It stresses that the shop must take responsibility and not hide behind the old “we have to send it to the factory or head office” line. But the receipt requirement will see most people end up out of pocket.

I take my hat off to the young lady manager at Barberton’s Mr Price, who offered to exchange my Pu/Mock suede belts even without a receipt – though I did announce I was a journalist. 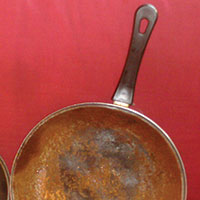 This shoddy-products problem from our Oriental Brics partners is not confined to Mr Price. For your viewing pleasure, please see the photo of two frying pans I bought from Shoprite. They began to rust two weeks later.

When the store manager suggested I must have left them in water too long, I remarked, You are joking,right? Then she hit me with the receipt line.

“No problem, I will express my dissatisfaction in my next edition,” said I. “Ok Bheki, bring them back and we will sort you out,” she responded.

Please, someone, tell me: are products from our Oriental friends not subject to SABS approval? Or are they just another brick in the wall?