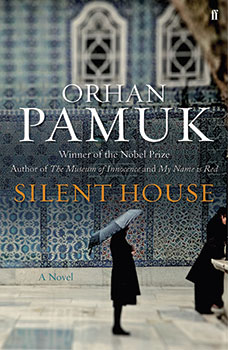 ovel. In the age of the tiny attention span, Silent House requires an initial adjustment to the subtle, leisured exposition.

Ostensibly, Silent House depicts the history of a family in gothic decay. Crippled by indecision, self-indulgence and fear of change, they dither as Turkey waits in tense anticipation of social trouble. The country is on the verge of the 1980 military coup.

Pamuk’s focus on the weirdly disparate  members of a single family parallels the country’s identity confusion. Teetering between Asia and Europe, it exhibits the post-colonial cringe in awe of the West’s industrial and intellectual attainments. But the impoverished and uneducated masses prefer the unquestioning solidarity of Muslim fundamentalism.

It says much for Pamuk’s wizardry that he is able to render the extraordinary family members convincingly. Consider the cast: evil ancient Grandma lurks upstairs in the crumbling villa, cruelly abusing her dwarf attendant (who just happens to be her dead husband’s illegitimate son); boozily ineffectual would-be historian grandson Faruk dribbles his life away with arbitrary transcriptions of unrelated old documents; dreamy left-leaning granddaughter Nilgun retreats into literature; classically selfish adolescent grandson Metin yearns for a glamorous life in America.

Grandma remembers when the great Mustafa Kemal Atatürk enforced a degree of modernity on Turkey (decades later she still resents the fact that men were forced to wear Western hats instead of traditional Muslim headgear). Elder grandson Faruk absorbs endless bottles of raki and threatens to write a great work – when he gets around to sorting his notes. His kind and charming sister chides her brothers gently and then retreats into the nearest book. Young Metin experiments with dope and drink and rages at an unkind world.

The heart of the family is the dwarf Recep. Lonely, modest and practical, he soldiers on while, all around him, doubt, anger and confusion strangle the nation. The intellectuals rattle on, the poor suffer as they always have, but Recep makes sure that everybody, including even the old witch upstairs, gets a good breakfast.

A hopeless future? Well, Turkey appears today to be debating its identity with relentless intensity. As is South Africa. Let’s hope that the Turks have more sense than to spend their time and energy arguing about the official formula for a true citizen. We all want a good breakfast.