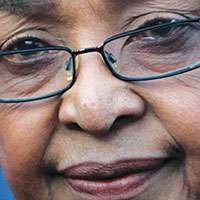 The extent of the conspiracy between apartheid police, prosecutors and the ANC leadership over the past 20 years to protect Winnie Madikizela Mandela from prosecution is extraordinary. Was the recent decision by the NPA to exhume some of the dead simply a ploy to silence the rebellious Winnie by rattling the bones in her cupboard?

Written by Rian Malan, based on reporting and research by Susan Puren and Fred Bridgland

This is a story mostly about our murky past, but it opens in our equally murky present. Last July, in open defiance of her party’s leadership, Winnie Madikizela-Mandela endorsed Julius Malema’s campaign for “economic freedom in our time,” which was tantamount to supporting the fat boy’s plot to oust State President Jacob Zuma at the ANC conference in Mangaung. This did not sit well with ANC secretary-general Gwede Mantashe, who told reporters, “What she is doing is dangerous”. Gwede did not add, Winnie will be punished, but, as young Julius has since learned, the price for challenging the ruling Zuma faction can be stiff.

A few weeks later, officers of the National Prosecuting Authority paid a possibly unrelated visit to the Soweto home of Dorothy Sono, biological mother of a youth who disappeared 25 years ago. They told her they had reason to believe they’d located her son Lolo’s body and wanted a blood sample for DNA testing purposes. NPA investigators proceeded to exhume two sets of bones from a pauper’s grave at Avalon cemetery, announcing that if laboratory tests confirmed they were the remains of Lolo Sono and his best friend Siboniso Shabalala, they might file murder charges against Winnie Mandela.

Kaboom! The story blew up internationally, for such is the power of the Mandela brand. Amid the excitement, reporters tended to overlook the affair’s most puzzling aspect: the missing boys’ parents anguished for decades about their sons’ whereabouts, but there was no mystery at all as far as police were concerned. Within days of the boys’ disappearance (on 13 November, 1988), police knew they were dead. They also had a fair idea who’d murdered them, and why. They even knew where the bodies were buried. But they shut up about it. For 25 years!

Those police were agents of the apartheid state. Winnie Mandela was one of their deadliest enemies – a revolutionary bent on tearing down white rule by any means necessary: the mortar, the bazooka, the AK-47, even the necklace in extremis. Why would white racist cops protect a murderous black power fanatic? We’ve a shrewd suspicion why they’re digging up those bones now, but why the failure to do so for the previous 25 years? As we said, it’s murky. Let’s investigate ... 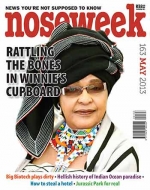