Ivan Visée was very happy with his Nissan Pathfinder (nose140) until he wanted to drive it to Cape Town. In preparation for the trip, he asked CMH Nissan in Midrand to give the vehicle its 120,000km service.

During the service they phoned to say there was water in the gearbox oil. Had he driven through any rivers lately? No? Ja well no fine, then. So they simply replaced his gearbox oil – at a much inflated price – and sent him on his way.

Visée headed for Cape Town, only to have the engine blow up 60km short of the Mother City.

Droomers Nissan in Paarl offered the unappealing choice of either waiting three months for them to recondition  the engine and gearbox or to install a new engine – at a staggering cost. Since the difference wasn’t that much, he opted for the new engine.

Once Droomers had taken out the engine to replace it, he realised that the gearbox and engine damage had resulted from a leak in the gearbox oil cooler. 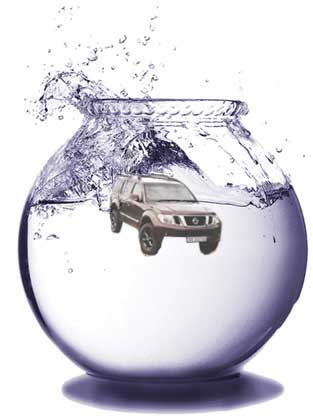 Surely, once CMH Nissan realised he hadn’t  driven through water, they should have done a pressure test on the only other possible source of water in the oil, namely the cooler? This runs into the radiator and circulates the oil through the cooled water of the radiator. Their failure to do so and pick up the leak was cardinal in causing the subsequent blow-up.

Their attitude was “cavalier”, says Klatzow and they clearly “couldn’t give a damn”. Their best offer to Visée was a derisory R20,000 refund on an almost R200,000 bill. They blamed Visée for not having picked up the fault earlier – while excusing their own supposedly professional dealership for not having detected it.

Shortly before nose140 went to press, CMH Nissan upped their settlement offer to R60,000, which was rejected.

The following month (see nose141) an even more detailed account arrived of the same problem – and the same consistently off-hand treatment from Nissan – from another reader in Pretoria. Richard Ashman learned that water-cooler leakage into the gearbox is a common Pathfinder problem.

He also discovered that Nissan’s standard way of dealing with the problem was to stubbornly not deal with it. And now we have the ultimate proof of this.

On Klatzow’s advice, Visée took his complaint to the consumer affairs department of the Retail Motor Industry Organisation (RMI) for adjudication. The RMI immediately called for a response from CMH Nissan, which came as a bundle of documents from their attorneys, Pearce, Du Toit and Moodie of Smith Street, Durban.

As is entirely proper, the RMI forwarded the bundle to Visée for his reply.

In the bundle (careless Mr Pearce!) was a letter dated 3 October 2011 from attorney T K Pearce, addressed to his client, CMH Nissan franchise manager Geoff Gray on the subject of Mr Visée and his Pathfinder complaint:

“I remind you that we agreed to follow the strategy suggested by Stuart Jackson (CMH’s financial director) and that is to sit back and allow the matter to wind a long process through the court system should they reject our offer,” said the letter.

It continues: “With that strategy in mind, I think that for now we should not even respond to their last letter. In the last paragraph of that letter they call upon us to make a ‘proper offer’. No doubt in time we will receive further correspondence from them reminding us that they are waiting for us to improve our offer [...]  In short, I am going to try to wear Mr Visée down by dragging the matter out. He must understand that his quick solution is to accept our offer.”

In January this year Klatzow called CMH’s Mr Gray for an explanation. “Regarding the letter written by our Attorney T K Pearce,” began Gray’s response,  “I would like to apologise for the wording used and can assure you that it was not and will never be our intention to delay resolving this case.

“During our discussion on Friday you stated that the amount required to settle this claim is R234,289.28 and that this is not negotiable.

“You have rejected our offer of R60,000 and we therefore can’t reach agreement.

“Based on the fact that we cannot reach agreement the only way forward is for the matter to continue through the normal legal process.”

Klatzow had “extreme difficulty” in believing CMH’s “pious protestations”. So does Noseweek.