Of course everything on God’s Earth has a time, a place and a purpose, it goes without saying. It just gets a bit complicated finding what is where and when, that’s all, because there’s a cube in the equation, see? I mean, for everything you find probable in this Life there are 26 improbabilities, 3³, 3x3x3 = 27 in all. That’s why you go to church. God alone knows what the next second of time holds for us all. Dubya Bush went to church and learned that Saddam Hussein was about to nuke the United States within 45 minutes and the rest is history.

But we are a secular state, our 1910 constitution laid down that we should not let th’ Almighty do all the thinking, and that’s why the P E Municipality in 1960 called on Sam Konig as consultant in the matter of a new sewage system for the new Block E of their Dreamtime Bantoe Habitat otherside their Caucasian habitat.

Sam was a sociologist, forsooth, and how he became so smart a facilitator as to facilitate the separate but equal facilities for black and white bowel-relievers is one of God’s great mysteries. The law said one was not allowed to mix black and white turds on their way to the bog-farm. In fact there should be two separate but equal bog-farms. Furthermore, when faeces were recycled on such ethnic bog-farms to God’s own pure H2O, such as astronauts used for making tea, they should never be conveyed to the Indian ocean in a common ethnical pipe. Indeed, if ever there should be a South African in space, he should never be obliged to make his tea from recycled Negro poo.

Alas! I lost track of Sam. He was sent to a kibbutz to see about digging buckets of crap into God’s good earth Chinese-style for growing pumpkins and he never came back. I went off to boep and almost never came back. Trouble in boep was they didn’t know where to put me. I couldn’t go to Robben Island, that’s where the Bantoes were, and I clearly couldn’t go to Pta Central, that’s where SA’s 1,000 worst white criminals were and I would teach them bad habits and... and in the end they just stuck me in the Prison Madhouse along with an ou, name of Tobroek, who also had got into high-velocity-explosives-type politics. I was given a New Testament Bible and told to think about Jesus for a year. He was given an Old Testament and when I asked for the Old Testament too because of its excellent English I was told, No, I would use it for purposes of draadtrek, which is to say onanism. I’ll try not to, said I, and anyway what about Tobroek, he’s got the Old Testament hasn’t he? Ja, said they, but he’s a Jew, he can draadtrek himself unto death as far as we are concerned. Ja, said I, Adolf Hitler could have saved himself a lot of Zyklon B and a very bad reputation if he’d just rounded up all of Europe’s male Jews and stuck them in forced Old-Testament-reading camps, hey? What? said they. They’d never heard of Zyklon B. Nor A. Hitler.

Well, Tobroek sits solo with Moses for a year down his end of the Madhouse corridor and I sit solo up mine and have a crack at thinking about Jesus, but truesgod after a couple of weeks it occurs to me that it’s not the meek that inherit the Earth, it’s those with access to capital. Also I remember an old Methodist neighbour from my youth who drank much dop on the quiet, and one day when I hit 16 and had my first experience of love on a midnight rugby field he said to me with some envy, Yes, young man, Heaven’s all right, but Hell’s the place for pals. So I sit in the Madhouse, set to and think about the Devil. How to make a pneumatic cannon you can load at a filling-station free-air pump, with a coke bottle projectile you can fill with petrol at the fuel pumps. For Peoples’ Warfare. I’m just about ready for field trials one morning when my cell door slams open and a bewaarder says Trek aan jou baadjie, kom!

You don’t ask where you’re going in boep, so I put on my jacket and step outside and there stands ou Tobroek in his and they chain us up hands and feet and Tobroek says They’re going to send us to Robben Island. They didn’t, of course, they took us to the other end of the prison compound and voila! there stands a brand new boep they’ve built just for us white political bandiete. But we never had political prisoners in SA, only prisoners found guilty of threatening the security of the state. Lovely.There are about 20 of us now, of every known opinion, red to infra-red and left to sinister, and we’re allowed to talk to each other. Yakyakyak, talk talk talk, and then suddenly one day a new bandiet appears whom none of us recognises from any organisation lawful or unlawful, and we’re all terribly suspicious that this is a plant. 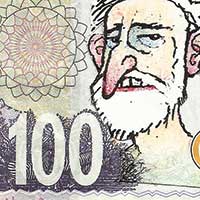 But it isn’t, this is a top-technique counterfeiter of banknotes and they really don’t know where to put this gent amongst the country’s crims. His notes are so good, says he. The police wouldn’t believe he’d made them, so he took them to his workshop and made one before their amazed gaze. This one appeared as exhibit A at his trial, and when after six months the whole melodrama ended except the tidying up, they realised it had simply disappeared. Entirely. But everybody knew it was the judge who had nicked it.

Alas! We lost track of him too. They entirely disappeared him. Maybe they built another brand-new boep just for him.