There have been quite a few pop songs over the years paying tribute to those letter carriers who have a stellar reputation for delivering our mail through sleet, snow and rain.

Oh, sorry, that’s the American scenario. In Mzansi, we have to say “through blazing sun, strikes (unless it’s the postmen of course) and rain” as well. In fact, given the conditions that our dedicated letter carriers must endure to deliver summonses, bills and miscalculated municipal rates bills, it’s only right we should sing the praises of these trusty messengers.

It is not they who should be blamed for the postal service having been reduced to the bearer of bad news only. These days, all good news is sent via the super highway.

It’s sad we’ve slowly lost the human touch – and miss out on the joy – of receiving a hand-written letter or a precious birthday or  Christmas card you can display with pride.

However, Barbertonians are very pissed off, gatvol, sikwate blind (very angry) at the postman. Maybe not the actual man who battles the elements and the dogs, but certainly at his employer. You see, somebody decided a few years ago to relocate the Barberton Post Office to a privately owned retail complex.

So now Barberton is stuck with a monstrous bunker of an old post office building that is an eyesore in the middle of our beautiful, mountain-framed town. The PO is now hidden away in the Eureka Centre because the old monstrosity had become too costly to maintain. Fair enough. But it is not fair that (extremely reliable sources have told me) numerous offers to purchase have been rejected, resulting in an eyesore so irritating it would make pool chlorine feel like soothing eye drops.

Aesthetics aside, the building has become home to vagrants  and a rubbish bin for passersby. Speaking of which, what is it with my black people with littering? They do it all the time, for example with empty cans or bottles chucked out of car windows. I can’t stand it. But check out their lawns or the street in front of their homes.

Be they “black diamond” houses, RDPs or even shacks, you won’t find so much as a candy wrapper there, yet they have no qualms littering public spaces. I’ll never understand the mindset. Boy, do things like this make me miss the USA!

Back to the postman. Few locals can understand why the post office gave up its own building to move into a privately owned complex – most probably at an extremely high monthly rental. 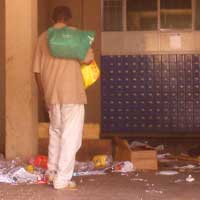 The community’s demands are simple: “Yewena (hey, you) Mr Postman, do something about this monstrosity, eyesore, litter-infested vagrant’s den, and prostitutes’ quickie joint. Why the hell don’t you sell the bloody thing?

“You can, after all, make it your contribution to the fight against human trafficking.”