The cover portrait depicts Roger Lucey as a cross between Rasputin, the Mad Monk and Charles Manson. Dramatic, but a bit harsh for a well-meaning, talented bloke who has survived wild excesses and picaresque adventures to produce a startlingly honest autobiography. He may be the victim of a memorably abusive father, sadistic priests, Special Branch spies, music industry creeps and vicious Yugoslavian war-zone nasties, but hey, Roger is alive and surprisingly well.

In a sense, he represented a particularly vulnerable 1970s community of white South African youth who, often unconsciously, anticipated political change. Idealism and excess ruled in a giddy whirl. Particularly in the muso world, where forbidden mixed-race social contacts confirmed the spirit of revolution.

The book opens and closes with references to a government spy, Paul Erasmus, who eventually confessed to deliberately ruining the young Roger’s burgeoning career, precipitating a torrent of consequential woes. Mind you, woe started early in the life of the Durban imp whose dad was in the habit of beating his mother. And his father’s raffish friends, included a big game hunter who liked to play with 10-year-old Roger’s winky. 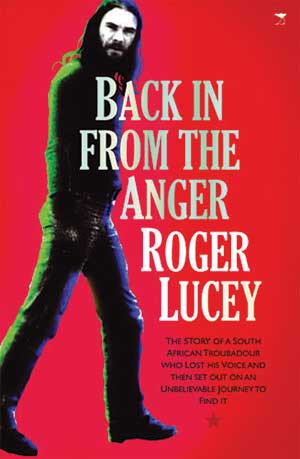 School was not an unmitigated disaster, as the boy showed athletic promise and enjoyed some renown. With his black friend, Jabula, the slightly older son of a domestic worker, they charged about the Durban suburbs, doing what boys do.

When not abusing his wife, Dad would get up to spectacularly harum-scarum adventures. As a photographer, he owned a Globe Swift two-seater plane useful for aerial shots. He made headlines by flying to Europe with a friend, travelling up the east coast of Africa. The return trip took 21 days and 31 fuel stops.

Roger recalls Durban exploding with musical activity in the ’70s. Church halls, sports clubs and warehouses echoed to the sound of mostly British and American hits, but bands that could claim their own songs in the repertoire were perceived as a cut above.

The leading rock band, Freedom’s Children, had a loose musical association with the Afro- jazz pioneers, Malombo Jazzmen. When they played together at the Durban City Hall, the black musicians dressed in overalls, with buckets and mops offstage. The idea was that, in case of a police raid, they could seize the mops and claim to be cleaners. Thus apartheid.

Lucey realised that his dependence on copious use of cannabis had become a problem. He used it to blur his fear of his violent father, of compulsory army service and bleak job prospects because of a lack of education.

His early songs were loud, raucous and angry, protesting against society, state and church. He says: “The biggest reward of this newfound form of expression was that it brought an enormous sense of satisfaction and a feeling of belonging to a musical fraternity that, despite its antisocial image, earned the respect of my peers.”

Inevitable army service came, with its longueurs and shocks. A friend, caught in possession of dagga, was placed in the tender care of Colonel Aubrey Levin, psychiatrist in charge of Greefswald, of Truth and Reconciliation infamy who, today, is being investigated by the Canadian authorities for alleged sex crimes. The friend became an embittered ruin.

After a brief, fruitless attempt to break into music in London, Lucey returned to find the townships on fire. It was 1976.

Roger married the beauteous and intelligent Sue and they soon produced a baby girl. And
Lucey produced his influential album The Road is Much Longer. There were disputes over including some anti-government songs, and lawyers insisted on cuts. An SABC head of programmes said he liked the songs but could not allow them to be broadcast because they “might corrupt the morals of the youth”. Police confiscated copies in shops and owners refused to display the albums.

Years later, in the Mail & Guardian, the spy Paul Erasmus described police raids on Lucey’s home, how they tapped his phone and intercepted mail. Erasmus admitted threatening club owners and venue managers who associated with the long-haired musician.

Last year Lucey received an MA scholarship to Duke University in the US.

He sang his own songs, full-throated, at the Cape Town launch of his extraordinary autobiography.