Not long ago I wrote about the deployment of fraud accused Paul Mpele to the post of Umjindi Municipality’s Chief Financial Officer (CFO) – locally dubbed “chief fraud officer”. Mpele is under investigation for serious fraud – a whopping R3.2 million-worth – allegedly committed while employed at Thaba Chewu Local Municipality (Lydenburg).

These alleged financial indiscretions came to the attention of the good people of Umjindi after Mpele was nabbed by the Hawks. Naturally they called for his immediate dismissal, but up to now there has not even been a suspension, despite the disgust of municipal workers who resorted to frog-marching him out of his office – and out of town.

All the media can do is expose and bring such matters to the public’s attention. Other institutions acting in the public interest, such as the Barberton Ratepayers Association, can take such matters further – through the courts – the judiciary being the only institution the powers-that-be seem to respect. Some examples: the Limpopo textbook saga, e-tolling (at least temporarily), and probably the most famous one of them all, the arms deal.

Oh! that politician, Patricia de Lille, of that nobody-little-opposition-party (before joining the DA) and Noseweek, and the Mail & Guardian, they must have made those who feared being caught in the arms-deal saga, really nervous! But no, they saw De Lille as just some pisswilly opposition and Nose and the M&G as “just perpetuating the counter-revolutionary stance” that we in the media are known for – until some Joe-shmo do-gooder decided he’d approach the courts and ask for a commission of inquiry. Talk about exciting court actions: local businessman, Fred Daniel, based in the neighbouring rural community of Badplaas where he owns the Cradle of Life nature conservation centre – which is also home to the Badplaas Tourism Centre, near the Machadodorp turnoff – decided the only way he could get the Mpumalanga government to fulfil its constitutional obligation of economically developing poverty-stricken Badplaas, was to take it to court.

And get this: while taking on DD Mabuza and his government, he followed this up by instituting court action to order President Jacob Zuma to launch a commission of inquiry into corruption and other misdeeds in Mpumalanga.

Judge Ronel Tolmay, sitting in the North Gauteng High Court in Pretoria, ruled on 29 November that the Mpumalanga Tourism and Parks Board must act in terms of their constitutional and statutory obligations to make a positive contribution towards economic development in the Badplaas area.

Daniel and five other applicants instituted the action in March 2010 against D D Mabuza and 21 other government functionaries and departments, in particular the Mpumalanga Tourism and Parks Agency (MTPA).

The case was expected to run for two weeks but it took only three days for the parties to consent to the following interim court order: “The application is postponed… pending the application that was brought by the first applicant in the Constitutional Court… the tenth respondent (Mpumalanga Tourism) shall act in accordance with all its Constitutional and Statutory obligations…” In effect, it orders the MTPA to do their job.

Daniel’s more recent, separate application to the Constitutional Court was prompted by the extent of the corruption, public maladministration, misuse and abuse of power, assassinations of political opponents that the police are somehow unable to investigate and prosecute – the general shambles in which the Mpumalanga government finds itself. He and other concerned citizens wrote to President Zuma on 9 July last year, asking him to invoke his powers under the Constitution and the Commissions Act to appoint  a commission of enquiry into these matters.

When the President ignored the request, Daniel applied to the Constitutional Court to compel him to appoint a commission of inquiry. His application was supported by sworn affidavits submitted by a number of prominent leaders within the province, and elsewhere.

The Chief Justice directed the President to file a response to the application by 12 December – after which further directives might be issued by the court. 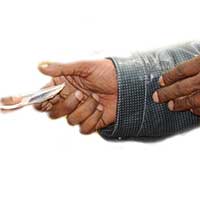 Both matters are in limbo while the Mpumalanga government and Daniel’s lawyers discuss a way forward.

However Zuma – at least for now – hides behind the fact that there is already the North Gauteng High Court case and cannot, will not, consider establishing a commission until the case is concluded.

In the meantime, in true ANC style, Daniel has been accused of having a political agenda, all because he donated money to COPE when Lekota and his crew were seen by many to offer opposition “hope”.

Now I know why my Guardian does not get provincial government advertising – it’s because of our “political agenda”.