I have on my face that sort of structure you might call a three-stage schnoz, something like those three-stage Atlas rockets they used for shooting people to the moon, only instead of pointing heav’nwards this feature proceeds from twixt the eyebrows to the lips and teeth. The first stage sticks out at about 45˚, the second at 30˚ and the final bit is roughly vertical, but please do not imagine this as being like that great flabby fatbag on the elephant seal, rather it is as the pointy refined nose of the elephant shrew. Indeed, if I had my nostrils right at the tip and prehensile muscles there like the elephant itself I should be able to put food into my mouth as does that beast. I should be able to play the piano whilst eating my lunch.

But people have got used to it round here. It’s only now and then that small kids hide behind their mothers’ skirts, Japanese tourists pretend they’re taking photos of the hadedas at the Botanical Gardens Tea Terrace when the camera is pointing straight at my head, that sort of thing. And my son Joe thinks it’s a classical Pythagorean type of nose, in fact, when on holiday in Athens he bought for my birthday a Greek fisherman’s black cap like Desmond Tutu’s; it goes well with the intellectual nose and dignified white beard. Says 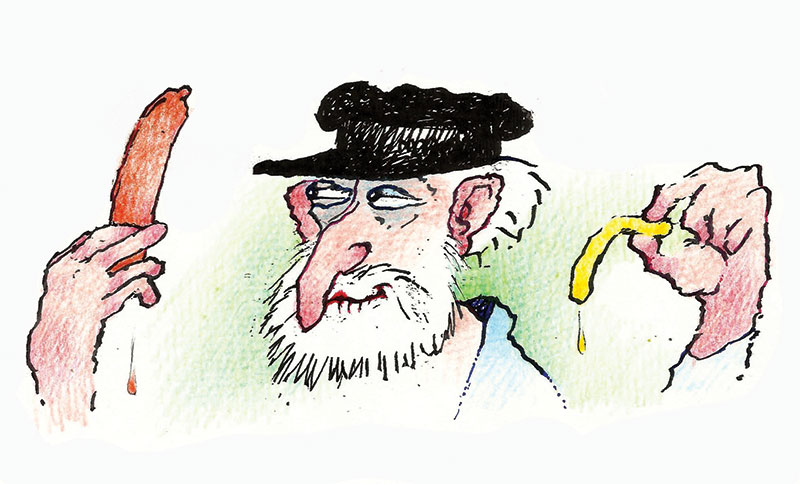 Joe. So now we’re going to meet at the Musgrave Mall, upmarket for a special treat, this now being his birthday. I put on the cap and comb the beard a bit and take my classical Zulu umsimbithi walking stick and step out in a fatherly sort of fashion.

In the middle of the concourse stands a table with a white cloth and many small blue bottles of something to rub on your pubescent face. There stand also two nice young pink people without pimples, 17-or-so years old, students I should say, male and female, eager, with pamphlets about the face-mooty for passers-by. The girl is v. pretty with a golden ring in her nostril and a ready smile, she trips up to me and displays her pearly teeth. You must be from Israel? says she. No, why? say I. Your nose, says she, and where are you from then? Venezuela, say I. Cedric, says she, this gentleman is from er... Cedric smiles too. Aah, Israel! says he, and what is your name, sir? Chavez, say I, Hugo Chavez. I Aztec. Joe appears. These my son, say I. Is name Jesus. Ho! Jeejee, say I, spik Aztec! Methyl Cyclohexl Oleate, says Joe, Carboxymethyl Cellulose. Popacatapetl. Wow! says Cedric, what does it mean? It mean your country ver beautiful, say I.

Joe smiles graciously, I tip the Greek hat to the lady in the gentlemanly Venezuelan manner, and we’re off to the supermarket and there before us stands a table with Raymond Ackerman P n P Specials: teiglach and pomerantzen and all things Eastern European-looking and yummy.

We stand and gaze, and a plump alte kakker (old man) in a butcher’s apron and velvet yarmulka comes along and very friendly says, Hey sorry fellows, this is the Kosher department, Halaal is over there – pointing – but the only halaal thing they’ve got in P n P just now is Hot Cross Buns.

Are you loopy or what? say I. That is a New Testament-type bun, what do you put on an Islamic bun, the crescent moon and the planet Venus? Oh no, says he, just half the cross, and you can’t confuse it with the Christian Bun because there’s tanz elachi in there too and the aroma makes it immediately recognisable as a Kashmiri recipe. Well thanks, say I, maybe we should stick with the Kosher. Or maybe they’ve got some Pakistani Pomerantzen over at Halaal? says Joe. Where are you from? says the old bloke. Gaza, say I, we got out through a tunnel. He sits down. Weh ist mir! says he. 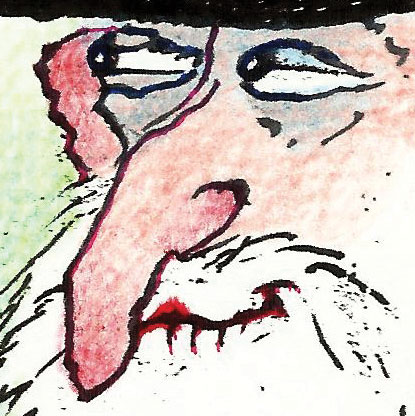 Joe smiles graciously, I tip my Greek hat to the alter kocker (old fart) in the conciliatory Tutu manner, we move off to Halaal Sweetmeats. We glance about. You know, says Joe, what I actually rather fancy is something sort of carnivorous, really chompy meat, let’s go to where the ordinary secular sausages are. And there indeed they are, waiting for us at Ready-Cooked Meals, glisteny-greasy, slowly smoking in a great heap and too yummy for words; we join the queue of overweight men all eager to get at the sizzling fat and ready themselves for cardiac arrest at the age of 40. A miasma of vapourised cooking oil hangs all about, there in a seething great tub of the stuff are the chips, long, floppy, a bit crisp on the outside, golden, heavenly, and there stands a monstrous fat mama with a wire scooping thing at the ready. She smiles, we smile, she plunges it in the tub and scoops out a kg or so, pure cholesterol and carbohydrate such as made Scotland famous, and we’re off to a bench in the park.

The Kosher alter kocker has entirely regained his composure. There he stands, grinning as we come by with our paper bags all translucent from the oil inside and the chips yummily sticking out the top. So you found what you want! he chuckles. Oh ja, says Joe, Glasgow’s gift to mankind: pork bangers tomato sauce and slapchips. Alte kocker’s face falls. But you said Gaza, says he, what were you doing there? Smuggling pork bangers, says Joe. A/k sits down again. Oyoyoy weh ist mir! says he.