Books: A crime too large to comprehend

’Twas the month before Christmas, and sentimental precedent decreed something soppy in the way of book reviews. But circumstances decreed otherwise.

Barry Sergeant’s 469-page exposé of the Byzantine criminal shenanigans that were master-minded by the incredible Brett Kebble is hardly festive reading. But it has its fascination. And perhaps the pious yuletide reader will appreciate the moral aspects of the author’s revelations.

In a sense, the wicked frauds perpetrated by the ingenious Kebble and his cast of accomplices are too big for South African comprehension and action. After all, can South Africa even afford to persevere with a thorough discovery of the enormous  mining house villainies committed and, consequently, pursue just desserts for guilty tycoons and gangsters? The scale of the R26-billion fraud is clearly too daunting for officialdom to handle, preoccupied as it is now with political fraud charges and countercharges.

Besides, many of the dramatis personae fingered by Sergeant are powerful and influential players. The murder of Kebble in 2005 remains a mystery, and, like various other loose ends, is likely to remain so. 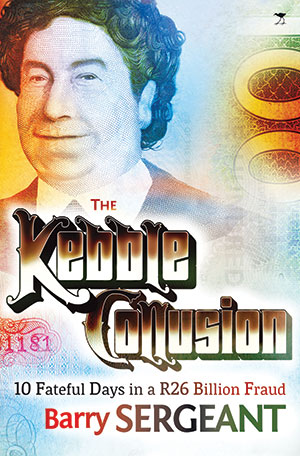 Author Sergeant  has laboured mightily to produce the facts, and succeeded in collating a seriously detailed record. There is plenty of material to engage brokers and accountants, with a comprehensive index and graphs. It is not a beach book.

It does, however, contain enough human interest for those who wonder about the nature of the man who wrought such havoc in a relatively short period.

I can vouch for Kebble’s notorious charm. At the home of mutual friends in Cape Town, some 15 years ago, this Michelin man would skip in, surprisingly light on his feet, to amuse and entertain guests with enthusiastic knowledge of fine food and music.

The darker side of his character was known to Sergeant, who spent time with Kebble, and developed a modicum of sympathy for the boy who never managed to please Roger, his disparaging dad. (Kebble senior referred to his eldest son as “my other daughter”). Ironically, when Brett became powerful, father became jealous.

The Kebble Collusion is an apt title. Many financial institutions, lawyers and bankers would stand accused if all the facts were investigated. Much obfuscation has occurred in official and private circles. Sergeant makes it clear that he will have no truck with the “assisted suicide” theory on Kebble’s death. It was a convenient murder.

The authorities have their priorities. Judging by the current succession of expensive commissions inflicted on the public purse, the truth of the Kebble disaster will never be probed in all its explosive elaborations. Which must be a huge relief to a lot of people, at various levels of society.

Sergeant has done South Africa a signal service in applying himself to a task that, in a principled and ideal world, should have been tackled by a dedicated, sophisticated team of official investigators.

His labours fly in the face of a host of powerful individuals who remain unpunished for their participation in vast villainy.

The authorities appear to have been overwhelmed by the prospect of entering the dizzying maze of deceit constructed by Kebble – and the possibility of meeting dangerous obstruction by establishment parties, both private and official.

Many had begun to believe that the crime would be allowed to fade from the public mind without proper inquiry.