Mitt and the baboons

When I was but a boy in Pretoria, just six years old-or-so, we had all sorts of mystical fables about the wisdom of mielieboere in their war with baboons. Always with the boer prevailing because the baboons were so dof. There was the one about getting a gourd and drilling a hole in it just big enough for a baboon’s hand and tying this gourd to a stake in the mielie field, then putting in the gourd a whole lot of pumpkin pips which baboons favour. Next morning there’d be a baboon who had stuck in his hand to get the pips but couldn’t get out his clenched fist and he’d been there all night too dof to let go, even now as the boer clubbed him to death.Also there was the one about baboons being able to count to four. Five boere with rifles hike up the koppie where the baboons live and after a bit, four of them hike down again. The baboons think that’s the lot and when they come out of hiding the concealed boer shoots them all dead.

Years later, here I am back in Pretoria se wêreld with me ol’ Air Force chum Biebie van Zyl who is now growing mielies out in the sticks and having terrible troubles with baboons. He also has a landing strip on his farm with a retired Air Force Tiger Moth in a barn. I’ll tell you what we’ll do, says he, we’ll fly round the baboons’ koppie and I’ll sit in the back cockpit with my retired army .303 rifle and I’m sure they will think the Tiger is just a bliksems big vulture and I’ll shoot the whole vokken lot stone dead.

So we do this thing, round and round the mulberry bush, and the baboons round and round the rocks opposite us, and eventually when we’re running out of fuel ou Biebie says to me Man, I think they know about aviation. The moral of this fable is: Never bullshit yourself that the whole great family of primates out there is stupid except your own personal self. 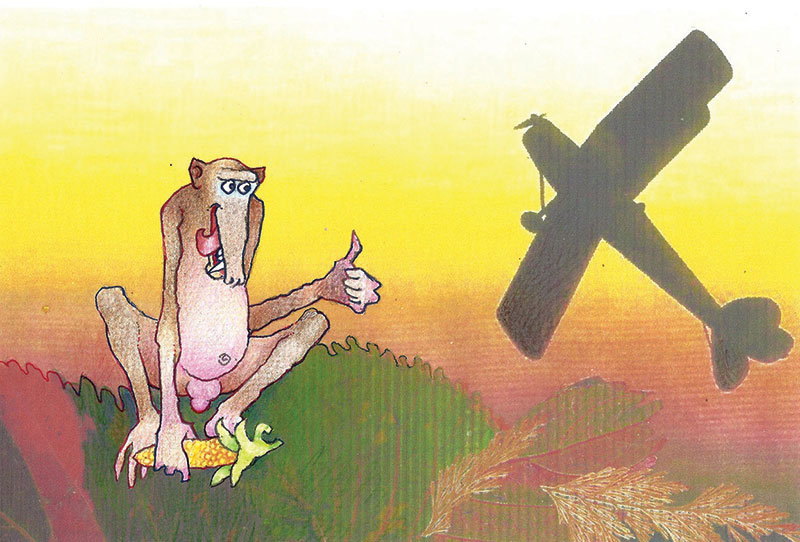 Well I’m stricken with years now but wise, ah, wise, and I have this grandniece, Cookie, who when she was but a girl, just six years old-or-so, said to me one day, You know, I can count numbers. Go on! said I. Let’s hear it then! And off she went, and when she got to about 30-or-so she said, When do I come to the end? No, said I, there’s no end. WAAAAH! she wept, I can’t go on forever! Never to worry, said I, you can stop any time you like, it’s just the numbers that don’t ever come to an end. She fell silent, but I could see she was sore perplexed. I gave it some serious thought myself: if there was no time and no space and therefore no numbers before the Big Bang, then after the expanding universe has reached maximum bounce, as it were, and started contracting, there will come a time when once more there is neither space nor time, nothing to have numbers of. A Big Counterbang.

Cookie has fretted about numbers clear through to matric. What’s the biggest number you can visualise? says she. Hell, I don’t know, say I; my father believed baboons can recognise four. I suppose by the same token I can recognise about 15,000, that’s roughly the number of runners in the Comrades Marathon stretched over a few kays as seen from the TV choppers early on when the whole lot are together.

Says she, I’m trying to visualise 32 trillion by seeing a certain number of perceivable things, like your runners. 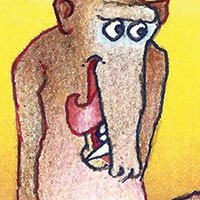 Spot on, say I, but why 32 trillion? Because the internet says that’s the number of US dollars stowed away in secret havens in the Channel Isles and the Cayman Islands where somebody called Mitt has his stash, says she. Who’s he? No he’s another American who needs his Cayman money for a rainy day, say I. He has an ordinary monthly pay-packet of $1.21 million for domestic expenses. You know: food for the missus and the kids, gas for the car, cubes for the dog, ants’ eggs for the goldfish. That sort of thing.

This person on the internet reckons these 32 are only the iceberg tip of the trillions, says Cookie, there are many more trillions out there and they’re used to dominate the World’s finances. But he says you should never deceive yourself the World’s people are a stupid bunch of baboons and only the rich know about money. In his opinion we’re pretty soon going to have to choose between capitalism and democracy. In his opinion capitalism is slowly dying.

Mine too, say I. Only quickly.