BOOKS: The scramble for limousines

The torrent of prognostication belching from the dark cloud of Mangaung is frightening. Rightly so, since the soothsayers agree that the outcome of that increasingly ominous gathering is likely to determine the fate of the nation for years to come.

William Gumede’s compilation of national and international commentaries in Restless Nation – Making Sense of Troubled Times, is required reading for those who need to refresh their awareness of what is at stake in President Jacob Zuma’s hectic battle for continued dominance of the South African political power complex.

The book is timely in a land awash in tides of political rhetoric, couched, more often than not, in debased and threatening language indicative of lust for perks and position. It provides a measured and intelligent selection of opinion on this country’s present woes, with possible options arising at Mangaung.

The unspoken assumption is that the ANC remains, in the elegant popular term, too much up its own bum to view the crisis of leadership as anything more than a squabble on the gravy train. 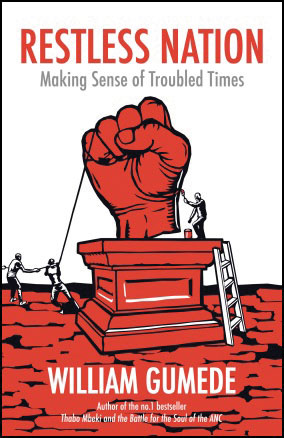 In fact, as confirmed in extracts from a wide range of publications including the Sowetan, The Washington Post, The Guardian and the BBC, it could represent an historic turning point – a profound threat to the constitution, to national  security and to South Africa’s standing internationally.

The fact that the world is still in the throes of a depression that shows every sign of lasting for years, dangerously exacerbates the South African leadership drama. Personal lives and interests look likely to play significant roles in a battle which should be focused on the larger issues. Instead, it seems we are likely to see time and opportunity lost in bitter scrambles for limousines and lolly.

Cometh the hour, cometh the man? Cometh the woman? We shall see. But at present the horizon remains embarrassingly free of noble leaders.

♦ WM Gumede is the author of the bestselling Thabo Mbeki and the Battle for the Soul of the ANC and the award-winning children’s book A Kite’s Flight. He is associate professor of public development management at the University of the Witwatersrand and a programme director at the University of London. A former deputy editor of the Sowetan, he also founded the Little Black Book published by the Financial Mail, which celebrates black professionals.