One of the skills I remember from my days of obsessive surf angling is knowing there are likely to be kabeljou down there if the water has a certain ginger ale colour, from sand being churned up in the surf. If the waves are a certain shape, you see.

This kabeljou is not a cod, of course, which it is in Holland, nor is it in any way a Cape Salmon, as described in South Africa. I mean it doesn’t look a bit like a salmon. Nor does it look in the least like a cod, for that matter. But old Natal protein anglers have called it a simon 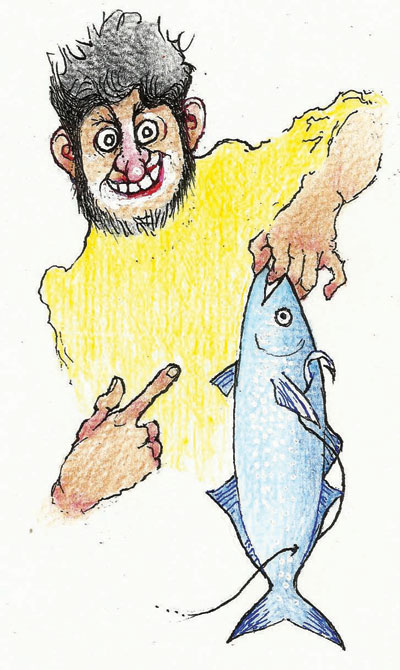 as long as I can remember. Simonfish. And part of this skill is in knowing such simonfish don’t hunt by sight, they do it by smell, they do it by moonlight; bad visibility from the churned-up sand is no problem, they can taste other species in the water, they taste with their nostrils, as it were. Also you should know other predators seem to hate getting this churned-up sand in their gills and steer clear of the ginger ale, so with a bit of saichel (sachel, saykhel: Yiddish for common sense) you can set out to hunt just this one species if you have the right technique.

But here’s the catch: you can tempt this KZN fish with a bit of sardine flesh from the Atlantic coast okay, or a chunk of any other edible thing if it’s hungry. I mean you can just stand around and see what happens if it’s a nice day, but if they are around as the ginger ale would suggest, then what you need is live bait and catching the live bait takes longer than catching the simonfish.

This is what you might call active angling, however evil the weather, bru, you’ve got to be there, that’s the sport. But Sonny wasn’t after the sport, he was after the protein. Subsistence fishing. For some years we’d watch out for each other at the Rocket Hut beach in early December, Sonny and I, when the shad season opened. The shad were nice and small then, a strange thing for a fisherman to say, but we wanted just about the minimum permissible size, 400mm, for live bait. For a 10kg simon.

We worked well together, we two, we had system. At first light we would have our tackle ready on the beach: one heavy surf rod rigged up with a 5/0 hook and a metre of steel trace, while we set to work with the light shad sticks, and as soon as we got a suitable live bait one would fix the 5/0 on to it and the other continue working the shad which could very quickly disappear as shad shoals do. Number one would take this shad and thread the hook through just the skin a little in front of the tail on the right and take the trace over the dorsal fin to the left and there thread it through the skin again so no muscle was damaged and the barbed point of the hook stood well clear of the body. Now he would walk with rod and live bait into the water about thigh deep and gently launch the shad to swim out to the ginger ale where with a bit of systemic luck there might be another shoal, of simonfish. Thus we would fish both shoals before they could move off.

The deal of course was that if one bloke got a simon he would give half of it to the other shareholder in this company. But the problem of course was which way to share it, head end or tail end. Sonny and I would bury the fish in the nice cool wet sand of the beach with only its tail sticking out, to keep it fresh while we were working the shad, see, and debate this division between us.

Let none of you philistines out there say a fish’s head should be chucked away with the spine and the fins; possession of it was part of the debate, there are all sorts of crunchy al dente nyoff-nyoff bits in there, esp the eyes when curried. And thus debating was what Sonny and I were doing last time I saw him on the beach. I told him of a specially dainty girlfriend I once had who was quite enchanted at the idea of eating real Indian food in a real Indian restaurant and how we’d pulled in at Prem’s Perfect Pie Palace and ordered battered fish and when it arrived and she peeled off some of the batter there was an eye staring her straight in the face and she dropped the fish on the floor with a small scream and never went out with me again. Such a waste, said Sonny. Waste of good fish eyes. Waste of good girlfriend.

A cheerful companion, an appealing personality. But he just disappeared. Just didn’t show up for the next shad/simon season. Then suddenly one day at the local PnP I came across his ex-missus at the till queue. Unsmiling as ever. Aaah!, but how is the family these days? said I with some forced cheer. How’s Sonny? No-oo

said she, died away that fellow. What, Sonny? said I in some alarm. Dead? That’s awful! No-oo said she, deceased away one time, no pains. What from? said I. Shattered nuffs, said she. Oh dreadful! said I. No-oo, said she, very terrible rascalbugger that fellow. Hintercoursing one European Lady, that fellow.

Poor lonely bloody fool, thought I. It was still Those Days. An Indian charra hintercoursing a European Lady stood a good chance of getting murdered, but Sonny was lucky, he got away with one year tronkstraf. The European Lady got six months. And when he got out he just deceased away of the shattered nuffs. Dismay, a broken heart. Such a waste. Of fish eyes, girlfriends, European ladies, happy days at the Rocket Hut. Everything.