Walking around my Barberton is not the same any more: that stupid protest has changed the way I see my town. I have covered many demonstrations in my time and Barberton is one of the worst I have seen: robots smashed – along with everything else the protestors could get their hands on. For goodness sakes, they even broke the windows of the SPCA!

But then again, what difference did it make to my fellow black “brothers and sisters”.  After all, the SPCA is for animals. Sad to say, but that is the mindset.

When these idiots destroyed my town – my spot –  I was angry.  In fact, there are a lot of disappointed souls wandering about this small mining town; yes, the mines’ lacklustre corporate social investment was also a serious issue for the protestors. No surprise. We have six mines and I am hoping to publish several stories that remind them of their Social and Labour Plan obligations (SLPs) as set out in legislation around 2002. They must provide proof of adherence by 2014. This will be taken into consideration when it comes to the renewal of operating licences or approval of new ones.

And then there’s the university-to-be. Citizens in different pockets of the province, from Barberton to White River, have been rooting for it to be built in their town and now we hear that Nelspruit is to have the pleasure. President Jacob Zuma announced on 5 July that it had been decided (without any public consultation) to locate the main campus at Nelspruit’s Lowveld Agricultural College.

In retrospect I have to concede this looks like a logical decision. It would have been nice to have the university in my little home town but it seems sensible to locate it where there is an already-established institution that can easily be expanded to include other disciplines. Clearly it will be far more cost effective than building a university from scratch and having some “sudden” landowners go off laughing all the way to a Swiss bank.

Not too long ago I had the opportunity to attend a workshop sponsored by the agricultural department at the agricultural college and I must say I was impressed with the campus: I’ve been fortunate enough to have visited many a varsity in the United States for one reason or another. So, I know a nice campus when I see one. Of course I have also been to Wits, where the building layout is too bloody complicated. It’s like a maze.

One of my favourite reasons to visit universities in the US, was when I and a couple of mates did a college circuit tour with our band. One of the perks was that we were usually offered “accommodation” by local students at the end of the show. We needed it. We were five guys travelling in a van – a Kombi, of course.

Funny memory: we had a Pee-wee Herman doll hanging from the rear-view mirror. We got pulled over in Up State New York by a State Trooper who did not take kindly to Pee-wee hanging there. He said, “You know that’s one of my kid’s favourite dolls, now ya’ll wanna take that off”. We quickly complied. 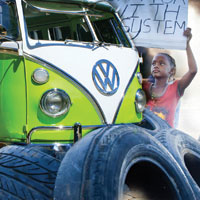 Then he looked at me and said: Boy, what kind hair you got on your head? as if he had never seen dreadlocks before. Go figure.

To return to Barberton’s university pain: one of the so-called services the protestors claimed to be insisting on was the location of the university in Barberton.

This was despite the fact that the idiots who incited these kids to protest knew that the decision-making process was still in motion and no town had been guaranteed the campus – not even Premier DD Mabuza and his push for White River. (He did not get it either, yes, amandla!)

But the kid protestors caused a lot of damage, a lot of pain, in their “call” for the university to be located in Barberton. And after Zuma’s announcement, a few of them approached me and said, write something about Zuma’s decision and mention that Barberton was robbed.

That’s why you caused all that chaos and stuffed up our town? Who would believe it?