Well if I say I live in a very small bachelor flat it doesn’t mean I am a very small bachelor, it just means the charlady who comes once a week is a great powerful mama who might well thump one to death if one were to get underfoot as she slams about with the cleaning tools. Best to make a nice little basketful of salad sarmies and one of those small-size fruit juice cartons with a doubled-over crinkly straw attached and flee the flat entirely. Go and loaf about in the botanical gardens or the City Hall art gallery. Or, best of all, the beach.

Outside the Rachel Findlayson Baths is the spot for such beach-loafing all right, there they have useful benches for the very purpose, with a sort of top part to shelter one from rain, sun or prevailing wind whilst one reverises about shad angling here if only this weren’t a classified bathing beach. Here I haul out the sarmies and select a nice tomato-and-lettuce number, hum-te-tum, when the sky is suddenly darkened as by a great leaden cumulonimbus thunder cloud, I look up aghast and there before me stands a frightful big black horse and a small demure Zulu lady aboard. She is clad entirely in black, riding boots, britches, tunic, tie and a big 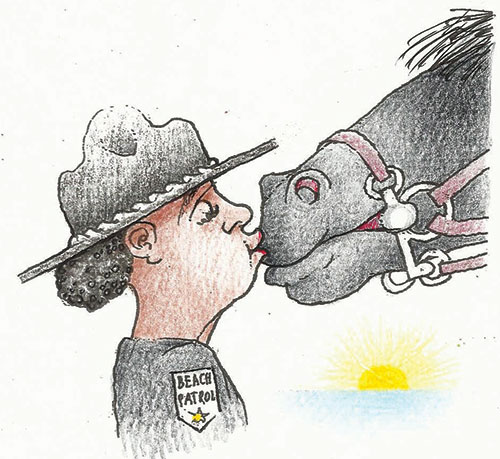 -brimmed frontiersman’s hat, all black. Only certain badges are silver, declaring her to be of the Durban Beach Mounted Patrol. She looks like one of Heinrich Himmler’s Waffen SS. She tinkles her fingers at me.

The horse eyes my lunch-box. I think she saw your sandwiches, says demure mounted patrolwoman. I stick it behind me. Hell, say I, what make of horse is that, f’chrissakes? I mean when you look at this creature you realise how the horse is of the same family as the rhinoceros all right, especially the black rhinoceros that carries its head high on an arched neck and has exactly the trotting action as those giant Clydesdale hard-labour farm monsters. Except a rhino’s legs are wee short things like a billiard table, I mean you should see the tree-trunks on this beast and great hairy feet and hooves the size of soup-plates. It slams one of them on the ground as if to demonstrate, the earth trembles, I huddle up my legs lest it crush my toes. She is a Frisian Horse, says Patrolwoman, the Humvee of all general-purpose heavy duty police work worldwide. She is called Honey, feel her nice soft nose, I sometimes can’t help kissing it, and I am sure she wouldn’t mind a nice tomato and lettuce sandwich if you could spare one from your lunch.

So I start to rummage about in my basket whilst deciding whether to kiss this creature before or after the sarmie when Patrolwoman’s cellphone buzzes and after a mere moment or two the horse hunches itself up in a mighty bundle of muscle and sinew and goes from a standstill straight into a full gallop at a single command as only race horses are supposed to do. Hammering an iron-shod hoof on a paved surface is the most certain way to lame a horse, pull a tendon, if not actually to break a bone, but not this horse, bru. The din is deafening, half a ton of horseflesh up top and iron shoes below on a brick-paved pedestrian walkway and that is the racket of a battle tank. They’re off in steep perspective.

And then way down there coming this way I see a tall skinny sort of isigebengu, a skellem, running bedonderd towards us, pursued by a tall skinny traffic cop on a stripped-down tall skinny sort of off-road motorcycle. Suddenly the skellem sees the battle tank and the Waffen SS approaching in steep perspective, as described, and comes to a dead halt in a single stride, as only polo ponies are supposed to do.

Feverishly he casts about; on his left is the beach, no running there, but here on his right is the kiddies’ paddling pool, hundreds of toddlers are hopping about all round the edge, it’s still too cold on this winter’s morn to get in the water, you see, and the skellem makes a break through the crowd, no horse nor motorcycle is going to come blasting through here and run over the kids. It’s a big pool, 50 metres-or-so across, one metre at the deep end, there’s a grassy bank on the other side, that’s where he’s headed, maybe there’ll be good luck over there. 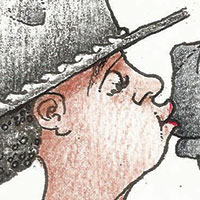 Patrolwoman doesn’t drop a single gear when she gets to the pool. She goes in at a full shattering gallop like John Wayne crossing the Rio Grande, a huge surge of white water up front, great clouds of splash fill the air, a dozen mighty strides and she’s out with a single leap at the vertical bit on the far side. The kids all yell Hurrah! It’s part of the day’s treat. The tall skinny traffic cop follows at full blast with his own bow wave, great clouds of steam fill the air. Hurrah! He changes down a cog or two at the far side, there’s a deafening 500cc exhaust roar as the bike claws up the vertical edge and all players in the drama disappear up the grassy bank. Hurrah! I sit down with my sarmies. Did it all really happen? Do I wake or dream? I must know. I nip off smartly and climb up the bank for the final act.

All is calm up there. Honey is leaning against the isigebengu against a brick wall. He’s wearing handcuffs all right but his legs are free and they look pretty athletic. She is trained not to squash him dead, see, but he’s sure as hell immobilised. The tall skinny cop is writing things down in a small book. How sweet, says Patrolwoman, you remembered the sandwich.