In what could only be described as a “so-called service delivery protest” scores of Umjindi youths, whose municipality falls under Barberton, went on a three-day rampage that began late on Thursday June 5.

By Friday the protests had gained momentum and lasted all day, with reports of additional uprisings popping up in almost every corner of Barberton’s Emjindini Township and surrounding rural areas. Protesters, some in their early teens, were met with a heavy riot police contingent on Friday, trying to prevent them from marching to the municipal offices in the heart of town. 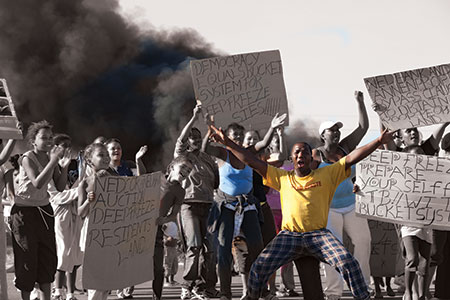 The police’s attempts to stop the march resulted in what became a nasty tit-for-tat: the police threw teargas and protestors reciprocated by throwing rocks and vandalising municipal property such as traffic lights, guard rails, rubbish containers – essentially, whatever they could get their hands on.

The police were overwhelmed and the protestors made it to the municipal offices, an achievement aided by the fact that they were coming from every direction. There they insisted on being addressed by Executive Mayor Lazarus Mashaba, to whom they handed over a memorandum on their grievances.

Mashaba promised the protestors that he would respond to their memorandum by Monday. And while it all seemed quiet on Saturday, Sunday and even on Monday, as a result of Mashaba’s promise, by Tuesday morning there was a redoubling of the heavy protests experienced on Friday, as residents anxiously anticipated an address by Mashaba at the Emjindini Sports Complex – reportedly scheduled for early that Tuesday afternoon.

Hordes of youths made their way to the Barberton CBD in the morning and went on the rampage, smashing shop windows and looting – targetting mainly Pakistani, Bangladeshi, Ethiopian shopkeepers – then made their way back to the sports complex.

Their looting and vandalism in the CBD not only succeeded in totally shutting down the town it added to the massive damage caused to municipal property and other foreign-owned shops that began in the township four days before when a Pakistani trader was stabbed to death.

Now, Country Life readers, if you’ve been wondering, “but what were they protesting about?”, then I’d ask you, “Where have you been for the past few years? On holiday in Lalaland?”.

As is the case, more often than not, this was nothing more than a local internal (ANC) power struggle which, by the way, began just before the 2011 local elections.

This was confirmed to me by some of the protest organisers and numerous other sources.

But, having covered numerous protests over the past seven years or so, including everything from land-claim issues, municipal workers and of course service delivery, I could tell immediately that the talk about service delivery was political bu***t. 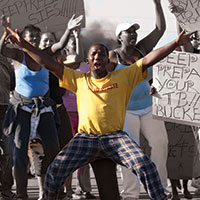 But of course the official line from the organisers is that the protest was about the typical issues: electricity, RDP houses and lack of job creation for the youth (with the last issue resulting in the attacks on the foreign-owned shops) and lack of community consultation; in this case, over a recent budget.
Let us not forget the obligatory demand for the mayor to step down; the speaker too.

And the Spear? do I hear you ask?  No, the Spear was not the issue. You must remember, the black man is, for the most, proud of his spear. Many agree that Zuma should just have bought the portrait and disposed of it.

By the way, in the Kasi they refer to the spear as a 45, I think that might relate to inches.