Let us proceed  with caution: things are not what they seem. For starters, Greg Lazarus is actually a composite of husband-and-wife writers Greg Fried and Lisa Lazarus. Lisa is a psychologist/freelance novelist, and her spouse is a UCT philosopher/writer.

Broad Daylight is a whodunnit which features (surprise!) the curious adventures of a psychologist (female) and a philosopher (male). Write what you know, as various literary sages have enjoined us over the aeons. And the couple do just that. And it kinda works, particularly if you happen to be a thriller fan with a penchant for mysterious woo-woo stuff, punctuated by wry philosophical asides. 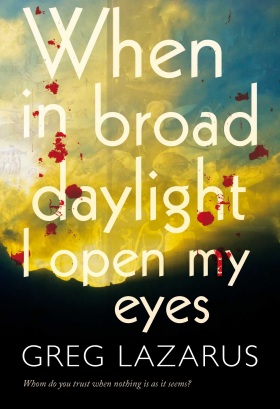 All in all, the novel captures attitudes now prevalent among a considerable proportion of politically and emotionally baffled youngish white urbanites. If at a loss as to how you should cope, there are three choices: (1) blame dark powers beyond human comprehension, and maybe consult a sangoma (2) spout ambiguous aphorisms culled from the works of disillusioned thinkers (3) try soothing substances.

The characters search for peace and love via combinations of the above, however none of these techniques are sufficient to ward off disquiet arising from the disappearance of a comely young woman of the post-doctoral philosophic persuasion. Nor are they efficacious against welt schmerz.

The authors are fiendishly clever at building and sustaining suspense. Readers may balk occasionally at the gnomic utterances of the incense-and-sandals brigade, or would-be loftiness of the academics, but tension is sustained till the surprise ending.

It’s film-noire style throughout, which, with luck, might take the fancy of Hollywood. Although set in Cape Town, Broad Daylight could feasibly be filmed in other venues as a satisfying formulaic thriller. Casting might involve the likes of an agonised Jeremy Irons, an enigmatic Glenn Close and a couple of pretty innocents, for the corruption of.

Capetonians not resident in the False Bay area are likely to have their prejudices confirmed by the tale: weirdos nest and proliferate on the shadowy side of the mountain. It’s an arty crowd, you know, especially in Kalk Bay. Tie-dyed souls communing  with spirits, and quaffing and puffing you-know-what by day and by night.

We all know what the Gautengese think of Capies (blerrie unfriendly racist snobs), but their irritation is as nothing compared with the suspicion the city’s southern and northern suburbs harbour against the False Bay setting of sinister Broad Daylight. Now they will realise that a seemingly innocent invitation to tea Over There might easily lead to mayhem and/or sexual slavery.

To think that the general public used to consider District Six a haunt of depravity. Now we have the sophisticated wickedness of False Bay to titillate our dreams – nightmares, courtesy of Greg and Lisa.