Let it be admitted at the outset: Jane Raphaely is an admired friend. Admitted? Perhaps the more appropriate term should be “boasted”. Now this truly astonishing woman has had the nerve to publish a truly astonishing autobiography. Has she no sense of restraint?

Well, no. She tells the unvarnished, moving and exciting truth, from rags to riches experience in a life embracing everything from near starvation in a British slum to high international glamour, flavoured with courage and zestful energy. 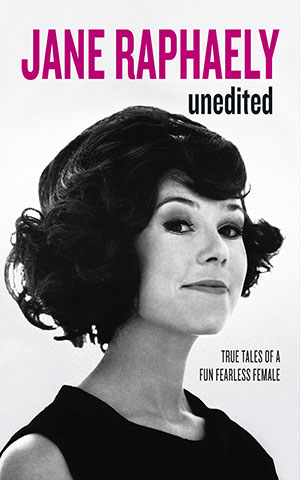 No wonder her boozy father, the classic Irish rogue charmer, accused her of the dreadful crime of being too intelligent. Her kind of realistic creative focus inevitably triggers jealousy in life’s losers. And Daddy Mullins was a hopeless loser.

Jane’s diligent Jewish mother kept the family afloat, sort of, while the eldest child devised endless ingenious ways of boosting income, from delivering lunchtime pies to factory workers (sometimes she was given a bite) to eking out a little something as a pre-teen agent for the Freeman Hardy & Willis mail order company, whose household goods and clothes were sold all over England in areas where clients were able to pay off in tiny instalments. In high school she found a Saturday job selling shoes in grimy Stockport.

It was a time of strict wartime rationing, so she and her siblings used to collect nuts to supplement their needs, and baby-sitting was a source of small cash from the surrounding semis and council houses.

There was fear: German bombers tended to discharge surplus bombs in the area after doing their worst in industrial parts. But Jane contends that it is possible to be poor without feeling underprivileged. “None of my fantasies included being born in other circumstances.” And at least Father didn’t run off, despite telling Mother: “It’s a good thing I love you, Phyllis, because you are just the kind of woman I hate.” Mother bore this equably.

But she does credit the Misses Agnew, two kindly maiden ladies of middle class means, who recognised talent in the young Jane, and taught her to speak “properly” and mind her table manners. These attainments were, of course, mocked by neighbourhood kids, but saved her bacon when she bloomed through a Rotary scholarship, attended the London School of Economics (LSE), and conquered pop TV in the USA.

The fact that this industrious English girl was very pretty didn’t hurt. Out of the blue, she was invited to appear on the Name That Tune TV panel, running weekly on NBC and CBS. It took a while to realise that the nationally popular show was deeply suspect, in that the “question rehearsals” often mysteriously echoed the actual prize-winning question list.

Ratings-mad producers (see the Mad Men TV series) even tried to persuade Jane to marry a co-star cowboy, in order to give the show a dramatic sign-off. The bashful cowboy was willing. Jane wasn’t. As usual, when she got her dollars reward, she sent half home to Mother. It was a valuable experience from another point of view: TV cured her of stage fright. This essential journalist had not previously had the courage to ask questions of public speakers.

At the LSE, Jane had met Michael and soon recognised that this South African was the man she wanted. It didn’t happen easily. Many Cape Town mothers had marked him down as a nice Jewish boy for their daughters. Jane, who had not been raised in the faith of her Jewish forebears, was viewed with suspicion when first she visited South Africa. 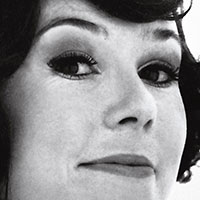 After much soul-searching, true love won out, and Jane tackled Africa.

The rest is journalistic history. Her first job was as an assistant copywriter for Van Zyl and Robinson, and this book-mad reader revelled in the opportunity to sell products via words. Lavish launch parties sparked all sorts of social fun and games – and useful business contacts. There was also a complementary freelance advice column in the Cape Times.

But the principled English girl was feeling awkward about the reality gap between PR antics and the different lives of white suburbia and the slums.

“The nearest I came to action was in the night schools for adults organised by churches... The only thing I could teach was English, and, when both pupils and teacher were too tired to concentrate on lessons, I just read to them... The terrible hunger for knowledge in people old enough to be my grandparents was heartbreaking.”

In 1964 Jane received an invitation that was to change her life dramatically. Danie Botha, advertising sales director of Nasionale Pers, called her to a meeting at head office.

“For an hour I sat facing a semi-circle of unreadable men, happily answering questions about the English-speaking market, imported magazines, advertising trends and South African women.”

To her astonishment, she was told “we do want to start a magazine for English-speaking women and we want you to edit it.”

She responded slowly, hand on stomach: “If you are going to do this, you should launch it in March because that is when advertising budgets are biggest. But that is when my next baby is due.”

Hubert Coetzee of Naspers replied: “We understand that you worked through your last pregnancy. If you are willing to work through this one too, we will give you all the support we can – and you can make your own rules”.

She did, and they did, and Fairlady (“I was appalled by the name”) was born. When Jane left to start Cosmopolitan in 1984, the magazine was selling more than 216,000 copies a fortnight in a population of 27 million, of whom only 5.4m could afford to buy the goods advertised in a glossy.

Then there was the Big O. Jane learned that Hearst had agreed to enter into an agreeement to co-publish a magazine for Oprah Winfrey and her company Harpo. As soon as New York awoke, Jane was on the phone to a friend: George Green, president and CEO of Hearst Magazines.

“Let’s co-publish in South Africa at the same time,” cooed Jane. Green counselled patience. The first issue of O, The Oprah Magazine had a print order of 1.1m and sold out.

The call for a meeting in New York came at last in June 2001: Cunningly, the Raphaely party put together an entire sample O magazine wrapped in Oprah’s favourite colour turquoise tissue, tied with a porcupine quill and tucked into a kudu leather dispatch bag stamped with the O logo. They were told they had 30 minutes to make their schpiel. Oprah was enchanted. Father must have grumbled in his grave.

During her Rotary days, the impoverished young leftist Jane was transported to Denmark to see how an egalitarian society lived. At first she was awed by the uniform, simple comfort of life in Scandinavia. Then she learnt of the rampant alcoholism and high suicide rate.

It seemed that humanity needed to strive, or it would falter. But then, Jane has always known that.