Julian Assange – in his own words

“Oppressive forces draw much of their strength from their ability to wield their power in secret.”

“I guess I will always seem alien to many people, because I was part of a generation that dug down into our machines, asking them to help us fight for justice in ways that would fox the old guard, even the protest element of the old guard, such as my parents, who didn’t know how to break the patterns of power and corruption that kept the world unfair. 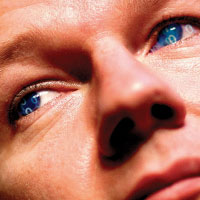 Computers provided a positive space in a negative field: they showed us we could start again, against ‘selfhood’, against ‘society’, building something less flawed and less corrupt in these fresh pastures of code. One day we knew they would change the world, and they did. The old guard would come with its name-calling and its media, its embedded sensor of ‘national interests’ and patriotism, its accusations of betrayal, but we always knew the world was more modern than they realised. Cairo was waiting. Tunisia was waiting. We were all waiting for the day when our technology would allow an increasing universality of freedom. In the future, power would not come from the barrel of a gun but from communications and people would know themselves not by the imprimatur of a small and powerful coterie, but by the way they could disappear on to a social network with huge political potential.

That was me at the age of sixteen.

At the age of sixteen I sat at my computer and began to leave everything behind. The computer and I were one. Into the night we went in search of newness. It seemed as if justice itself might live on the other side of a flashing cursor.

”The real morning of revelation came not with the computer, but with the modem. When I got that I  knew it was all over. The past. The old style. Australia as it used to be and the world as it once was. Over. I was about sixteen years old when this fresh dawn came in a little box that dialled up really slowly. The internet.

Within a few days of getting my modem, I had written a program to tell the modem how to seek out other modems. It scanned about the central business districts of Australia, and later other parts of the world, to discover which of the computers had modems. I knew there would be interesting things on the end of those telephone lines.

It’s not that it was subversive at that stage: it was simply a great reaching out and a great exploration of the world. The thing was sophisticated, but we weren’t, and to many of us it was like we were kids breaking into quarries or abandoned buildings. We had to see what was in there. It was the thrill of making it into the adult world and being ready to challenge it.

That’s how hacking begins. You want to get past a barrier that has been erected to keep you out. Most of them had been erected for commercial reasons, to preserve profit flow, but for us it was a battle of wits, too, and in time we saw that many of those barriers were sinister. They were set up to limit people’s freedom, or to control the truth, which I suppose is just another kind of profit flow.

Governments, of course, had computer systems at this time whose sophistication existed in direct proportion to that nation’s wealth and military might. For us the most interesting network was X.25, through which most countries ran their classified military computer sites. About eight hackers in the world had discovered and shared the access codes: it was just breathtaking to see how governments and corporations were working together across this kind of network. And the crème de la crème of the world hacking community was watching them.

“It was certainly addictive, projecting your mind across the world in that way, where every step was unauthorised. First you would have to hack the university computer system, then hack your way back out of it. While inside, you would then hack into some computer system elsewhere in the world – typically for me at the time, the Pentagon’s 8th Command Group computers. You’d dive down into its computer system, taking it over, projecting your mind all the way from your untidy bedroom to the entire system along the halls, and all the while you’re learning to understand that system better than the people in Washington. It was like being able to teleport yourself into the interior of the Pentagon in order to walk around and take charge, like a film in which you got to bark orders at the extras in shirtsleeves sitting at banks of radar screens. Awesome was the word. And we quickly stepped away from the fantasy of it all to see that some bright new element of the future was being played with. Virtual reality – which used to be a mainstay of science fiction and is now a mainstay of life – was born for us in those highways we walked solo at night.

You would bump into your adversaries inside the system. Like meeting strangers on a dark night. I’d say there were maybe fifty people in the world at that time, adversaries and brethren, equally part of an elite group of computer explorers, working at a high level.  On a typical night you would have, say, an Australian computer hacker talking to an Italian computer hacker inside the computer system of a French nuclear complex. As experiences of young adulthood go, it was mindblowing. By day you’d be walking down the street to the supermarket, meeting people you know, people who have no sense of you as anything other than a slacker teenager, and you’d know you had spent last night knee-deep in NASA.

I had always believed, and still believe, that oppressive forces draw much of their strength from their ability to wield their power in secret. We knew from the hysteria our fun had created, and from the new government legislation, that we had hit upon something fundamental about how secrets were hidden. Governments were scared: much more scared, it turns out, than they were of people demonstrating in the street or throwing petrol bombs over barricades. The internet would offer a model of insurrection that baffled corrupt authority with plain science. It said, ‘You no longer control how I think of you’. ”


Extracted, with permission, from Julian Assange: The Unauthorised Autobiography, published by Canongate.