Rhodes University Business School Professor Matthew Lester has been ordered to demolish his R7-million dune-top mansion in Kenton-on-Sea, or the Ndlambe Municipality will do it for him, the Daily Dispatch has reported.

A mammoth court case spanning almost a decade (see noses59; 79; 95; 117&120), brought by the municipality against Lester over his “illegal structure” – which locals have described as “a cross between a McDondalds and an aircraft hangar” – has culminated in the Eastern Cape High Court in Grahamstown giving Lester 180 days to demolish his house. 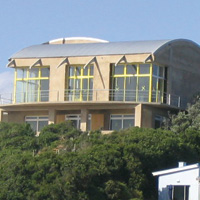 In his judgment, Judge Sytze Alkema said Lester could apply to the court for more time to undertake the demolition, provided he had good reason.

The report notes that the judgment is a boost for James Haslam, whose sea views were obscured when Lester’s tall mansion was built in the early 2000s.

Explaining his decision, Judge Alkema said the financial loss to Lester as a result of the demolition order would most likely be devastating. “On the other hand, if a demolition order is not made, I will be condoning the continued use of a dwelling found to be unlawfully erected”.